When I lived in my apartment in Omaha (I lived there for like......nine years. I am a very committed renter. Or I was just way too lazy to move), I had a first floor apartment with a nice little patio. I always wanted to make it a cute little space, but never did because I kept telling myself I was going to move.
Well, in October, I finally did move. The few pieces of furniture I had on my little slab of concrete went in the trash. My new apartment is on the second floor, and it has a very nice, big deck. But I had nothing to put out there, so I just bought a chair and threw an outdoor ottoman out there and called it a day.
The other night, though, I decided that wasn't good enough. I often sit out there and listen to my books, so I wanted a better space to do that.
I looked at a lot of pinterest posts, checked out a lot of sales, and decided to turn this: 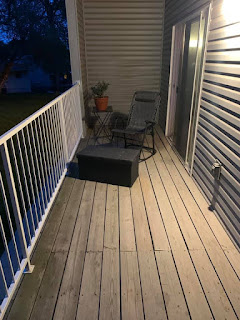 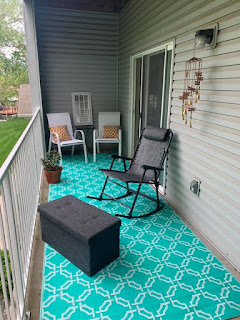 I am so so happy with it! I got everything from either TJ Maxx or At Home.

Posted by Jen Wilson at 9:01 AM No comments:

My friend Matt does this amazing thing on snapchat where he sends out a random question or thought of the day each morning. It's been since the pandemic started, but I'm hoping he continues this practice for awhile, at least for the rest of our lives.

This morning he asked about childhood moments that seem ordinary, but have a spot in our hearts. I immediately thought of two.

When Dad/Peg first got together, Dad moved into Peg's trailer. So when we were with our dad (which was basically every day due to the way my parents worked out their custody (no lawyers)), it was six kids and two adults crowded into a three bedroom trailer. The boys shared a room, but there were only two of them so do not feel bad for them. There were FOUR girls, and we all shared a room. We got the biggest room, but it didn't feel that way with two sets of bunkbeds. That's all that fit in the room. Two sets of bunkbeds, and there was a closet on one side of the room that you couldn't get into without sitting on the bed. We kept most of our clothes in the bathroom closet.
To say it was crowded was an understatement. But we made it work. But we were also pretty excited when Dad/Peg announced we would be moving to Glenwood (this trailer was in Plattsmouth) and moving into a house.
The house was a fixer-upper...to say the least. But it was a house. It still was short on bedrooms, but the one for the four girls was much bigger. Thinking back now, I don't even know how we would have split the girls up - Amanda and Nicole were in the same grade, I was a year older and Kate was a few years younger. But that doesn't matter, because us four girls went in together again and the boys were down the hall.
But the night we officially got the house, we went there to do some work. I don't know why this memory sticks out so much in my mind, but we did a picnic dinner there in the mess - we had sandwiches and chips, so it wasn't a fancy meal by any means, but for some reason that night, those sandwiches, all of us crowded into the one livable area of the fixer-upper...it sticks in my mind.

My other memory was with my grandpa. He was simply the best. While I was at school, he would record cartoon networks so I wouldn't miss any of the daily cartoons. Then, when he got done working and we had all gathered at their house (this was when my parents were still married, so I would ride the bus to the house after school to wait for my parents to get done working) and Grandpa would hit play. Nicole and I would sit for hours in the living room with him, watching the cartoons he recorded for us. He would smoke cigarettes and we would sit on his back, running our sandbox rake toy along his back. He got a nice long back scratch and we got this memory that is making me tear up right now.

I have a lot of other things in my mind right now, but those two always make me smile. And miss my grandpa.
Posted by Jen Wilson at 8:59 AM 1 comment: