Brew at the Zoo

Or, if you are our group, No Brew but Still Fun at the Zoo.

Missy, David, David's friend Gia and I went to Henry Doorly Zoo Thursday night for their first Brew at the Zoo of the summer. It was adults only (you had to show an ID to prove you are over 21, even old faces like mine), and it was $15 for non-zoo members ($10 for zoo members). The people next to me tried to use their mom's zoo ID to get in, but no dice.

It was so nice and peaceful to walk through the zoo without screaming kids, loud kids, annoying kids and strollers in your way. We went through everything but the jungle and were there for about two hours.

The only annoying thing about the event were the lines. They had four beer areas and five (I think) food trucks, but all of the lines were ridic. We never even got a beer (or any food, for that matter) because the lines were so stupid.

I am sure the zoo will reconfigure this for next time, because they are the zoo and they have crowds and public events figured out. So I highly recommend going next time it is offered! 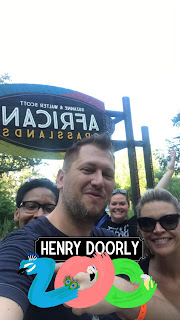