Nick came in on the train this weekend, and I didn't realize how much I miss him until I had to take him back to the train station on Sunday morning. But a lot happened between pick up and drop off, so wipe those tears, sensitive Sally.

Friday night I picked him up around 1030p from the train station on 9th and Pacific. I would be lying if I said I felt completely comfortable there. But I would also be lying if I said the people watching wasn't spectacular. We went home and watched some tv and then went to bed. We had a big day the next day, plus we are both old and go to bed early.

Saturday we got up nice and early and went to Shirley's Diner, one of my Omaha favorites, for breakfast. Then we headed to Midland for graduation. A lot of "my" students were graduating, along with our good friend Matt, who we lovingly refer to as MB3. After that, we went back to Omaha to run some errands (Target, Husker Hounds) and then we went to Nick's little sister's graduation party.

It is so weird to me that I have known Bekki and Hannah their entire lives. I remember the first time I ever saw Bekki, at Roosenblatt Stadium for a baseball game. Dan and Lisa couldn't take her out of Nebraska when she was brand new.

Anyway...after the party, we went to dinner with Mama Jan and Dick at Maria's, where I had one margarita and got wasted. Then we went to Hy-vee so Nick could get some good beer to take home with him, and then we went home for a rest. But only a small rest, because then we were on the go again to meet MB3 and the rest of the Midland people for some drinks and merriment.

THEN we went home. And then at about 445am we got up and headed to the train station and I got sad.

After I dropped him off I napped a little bit, and then went to church with Nicole's family. After that, we had a Mother's Day brunch for my mom, aunt, grandma and sister. 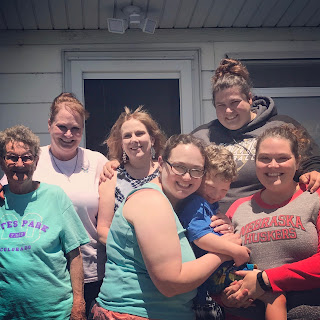 And of course, because I suck, I didn't take a single picture with Nick this weekend. But here's one of me and Paul. 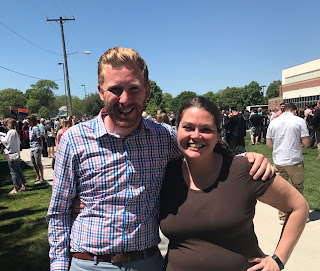