Well, I survived my first 10 days with Invisalign. Last night I switched to Tray 2.

The first two days weren't fun at all. My top tray went on just fine, but putting my bottom tray on hurt every time. Of course, my bottom teeth are way more jacked up than my top. I would get the back teeth lined up, but then sliding it down on my front teeth hurt bad.

I also experienced some discomfort with the trays rubbing on the inside of my mouth. I used a nail file to smooth them out, and then it was just fine. On day three, everything seemed to change. I was good. It didn't hurt anymore, and getting them on and off were no trouble at all.

I am eating less and drinking less soda, since I have to take them out to do both. I was a bit nervous about eating out with these things, but that was pretty easy too. I just snuck to the bathroom right after I ordered, then snuck back after I got done. These things have really helped with my evening snacking problem, also, since I do not want to deal with taking them out again to snack.

Last night I switched to my second tray right before bedtime, and I'm a little tight/sore today. It's not a bad as I was thinking it would be, though. Even though you can't see anything yet, I can certainly feel that things are changing. 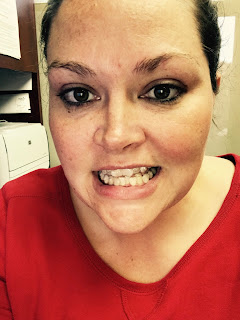 Posted by Jen Wilson at 2:35 PM No comments:

What a lovely, lovely three day weekend. I'm a little peeved that I don't get a 4 day weekend anymore (damn you Midland for spoiling me) but I will definitely not scuff at a three day break.

Friday I got up and went to kickboxing, ran some errands and then went to dinner for my grandma's birthday. She's 81. I hope she lives to 181.

Saturday I got all my meal prepping and house cleaning done, since I knew Sunday nothing would get done. I also got a lot of stuff cleared off my DVR, because you know, priorities. Saturday night I got to go down to Mama Jan's and hang with Nick's family.

On Easter,  I went to church with Nicole's family and then had lunch at Mom's, then dinner at Dad's.


At Dad's, we had an easter egg hunt for the kids, and Alex filled his basket to the brim with eggs. Then he ran in to go to the bathroom, so Kate and I took his basket and rehid all his eggs. We thought it was hilarious, but his little confused face made me feel really bad. Luckily, he thought the Easter Bunny did it. "That bunny tricked me!"

Oh, and because why not, we lifted the trampoline up over fences and carried it to the other side of the yard. 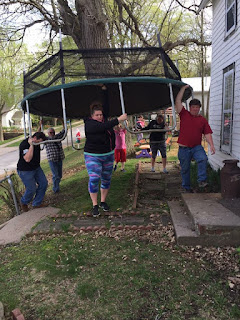 My bottom teeth have bothered me for a long time, but I knew I didn't want to walk around with braces. I was kind of interested in Invisalign, but assumed it wouldn't work for me.

With my new insurance I needed to find all new doctors, so I found a new dentist that seemed very holistic and advertised about "pain free dentistry". Obviously I am a giant wimp, so if something says painfree, I am all in. So I made an appointment at Dentistry for Health (you could make the appointment online - even as a new patient - which won even more points for them.)

My first appointment, on March 13th, was just a consultation. I talked to my new dentist about my lack of confidence because of my smile, and she said I would be the perfect candidate for Invisalign. I went in a week later for a cleaning. Then I went in to fill two cavities. Then, just two days after that, I went in to get the molds and pictures done to send to Invisalign.

Of all the appointments, getting the molds done was the most uncomfortable I had been in that chair. The way they shoot the material into your mouth can only be described as a caulk gun, and it's pretty disgusting. Then when they try to pull the molds out of your mouth - YIKES. It didn't hurt exactly, but I was fairly certain they were going to rip all of my teeth out. But before I knew it, they were done, and my digusting molds and pictures were sent off to be analyzed. I was told they would call me in 3-4 weeks when they got everything back.

So imagine my surprise yesterday, just ten days later, when I got the call everything was in and I could come in later in the day. I set an appointment to go there over my lunch break, and I got SO EXCITED to start this new process!

When I sat down at 1230p, my dentist immediately set to work putting "buttons" on several of my teeth. Basically, these were little teeth colored adhesives to attach to the trays. This process was uncomfortable, but not painful. Then we popped my first set of trays in (TIGHT, but okay) and I was sent out the door with boxes and boxes of my 28 sets of trays. I wear each tray for 10 days, so I was making a 280 day commitment.

The rest of the afternoon was weird. I felt like I was constantly pushing and prodding my trays with my tongue. I have never been more aware of anything. I had trouble talking. I went to kickboxing like usual, but my mouth was really dry and the trays were scratching the inside of my bottom lip, so it wasn't that awesome.

When I got home, I was so excited to take them out for a little while and eat dinner. However, I got them out and my teeth felt so weird with those buttons on! Eating was a challenge. I ate quickly because it felt so weird and I wanted to get it over with. Then I popped the trays back in. A few hours later I got hungry, but there was no way I was dealing with removing them again, so I just laid there hungry.

I have read a lot about these things, and most people say once I get used to them this will be better. I certainly hope so, because so far my less-than-24-hours experience has not been fun.

Posted by Jen Wilson at 9:53 AM No comments: 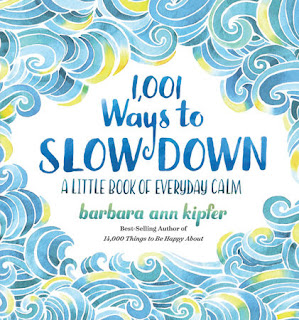 1,001 Ways to Slow Down is a list book of just that - ways to slow down. It not only offers several (SEVERAL) tips on ways to slow your roll, but also different activity lists, movies to watch, and other methods of calming down.

I had been feeling pretty anxious and a little all up in my head when I got this book in the mail, so it did come at the perfect time. I took a pen and marked some of the tips I felt really touched base with me (such as "skip a workout if it means hanging out with loved ones" and "slow down when driving" and "is the light going to turn green faster is you inch up on it?"). Some of the tips seem a bit silly ("sharpen a pencil with a knife") but for the most part, I found the tips very helpful. They made me stop and think about how much I do rush through life. I am rarely ever "in the moment", rather I spend time thinking about what comes next.

Ironically, as I got further into the book, I got a little bored with the list and wished I could put the book down and wait until I needed to slow down again to pick it up. But I couldn't, because I had a review to write. So I hurried through the tips to slow down. So...basically I wish I could have just stumbled upon this book and picked it up when I needed it. It's a good book to keep on your shelf for those days when life gets the best of you and you just need to chill.

Dr. Barbara Ann Kipfer is the author of 14,000 Things to Be Happy About and the Page-a-Day calendars based on it. She has written more than 60 books, including 1,001 Ways to Live Wild, The Order of Things, Self-Meditation, Instant Karma, 8,789 Words of Wisdom, The Wish List, and 4,000 Questions for Getting to Know Anyone and Everyone, and she edited Roget's International Thesaurus. She holds PhDs in linguistics, archaeology, and Buddhist studies. Dr. Kipfer is the Chief Lexicographer of Temnos and has worked for such companies as Answers.com, Ask Jeeves, and Dictionary.com.
Posted by Jen Wilson at 8:00 AM 1 comment:

The one who got away?

There was this guy, several years ago. I don't think of him often, but the other day, I was driving to Bartlett, Iowa to go to church with my family, and a song came on the radio and I was instantly taken back.

Sometimes I love that music can do that to you - take you back to a specific memory, a certain place at a certain time. That morning, however, I hated it.

I remember the exact moment when I ruined that relationship. I was at a bar, and I invited him out to play darts. Was I interested in him? Kind of, but I liked someone else more, and I was using this guy, we'll call him TR, to make the other guy jealous. Other Guy was at the same bar.

TR and I played darts, and we flirted, and he told me how much he liked me. I acted interested, I flirted harder, I lost on purpose at darts (I didn't have to try hard to lose...). Other Guy was watching.

Towards the end of the night, I went up to the bar to pay my tab, and Other Guy approached me, asking about TR. I played it off like he didn't mean anything. TR walked up behind me and put his arms around my waist. I wrinkled up my face in disgust, to show Other Guy I wasn't interested. But TR was much taller than me, and had a perfect view of my disgust.

"Oh, I see how it is," TR said. He let me go and walked straight out the door.

That wasn't the last time I talked to him, or even hung out with him. But it was never the same, and he made it very clear he wasn't interested. Which of course made me interested. So when things with Other Guy ended, I tried to win TR back. I even...asked him to be my boyfriend. And he laughed in my face.

I don't know that he's really the one that got away; I don't think we would have really made each other happy. But I hate that I hurt his feelings that night. And I hate that he hurt mine later.
Posted by Jen Wilson at 11:09 AM No comments: