I am EXACTLY even with last week, with was the EXACT goal.

I am completely happy with being even with last week. I ate whatever I wanted on Christmas Eve and Christmas Day. I reeled it back in the day after, and I have drank a ton of water this week to rid the toxins.

Yay! Another goal marked complete! Happy New Year!
Posted by Jen Wilson at 8:25 AM No comments:

2016 has been a tough year for a lot of people (not me, really...but I see a lot of memes about people complaining), but I am happy to announce one marvelous event managed to squeeze itself in before the close of the year. 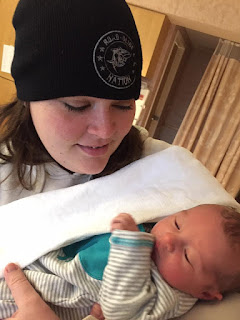 I have another nephew!

Bret Jon Wilson (named after my dad) came into the world on Christmas Eve! What an amazing gift. Mom and Dad are both doing well, and already being quit obnoxious with the baby talk. 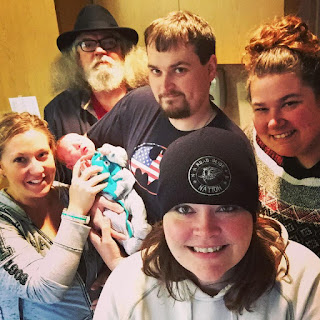 Hey-yo! I know this blog has been super lame lately, but I forgot what it is like to be a registrar between semesters. I am making it my new years resolution to make this blog a bigger deal again in 2017.

Anyway, this week's wellness check is as follows:

I am honestly pretty shocked at this weigh in, because I went into a severe funk and didn't work out Friday, Saturday or Sunday. I HATE winter and I cannot handle the cold at all.

With Christmas being this weekend, I am just really hoping to still be at my January 1st goal at my next weigh in.

Merry Christmas to you all!
Posted by Jen Wilson at 8:51 AM No comments:

I am ecstatic with my loss this week. I was expecting to gain. We had our holiday party at work on Monday, and there was so much food it lingered into Tuesday. That, along with the frigid temps that have made me EXTREMELY lethargic and opposed to going to the gym, was sure to equal a gain. I was scared to even weigh in this morning, and I almost didn't. But I did, and I'm so relieved.

Friday night we have our major holiday party at work, and the menu is BANANAS. I think that should be my only main obstacle this week.

I just NEED to stay motivated to work out, but it is so hard when it's this cold - I just want to be home on my couch under a blanket.
Posted by Jen Wilson at 8:34 AM No comments:

I had a meeting with my wellness coach last week, and we set a January 1st goal of 8 total pounds lost. I am beyond nervous. Yes, I am very close....right now. But a lot happens at towards the end of this month. I suppose this will give me motivation to stay on the right path.

Posted by Jen Wilson at 8:25 AM No comments:

On Saturday night I got to play Santa!! 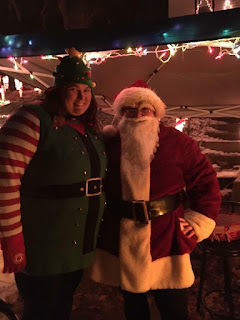 Most of you probably know that my dad is obsessed with Christmas and decorates his house to the nines each year. You probably also know that he dresses as Santa on the weekends in December and hands out candy canes. It's become part of Glenwood's history, and people are bananas about it.

On Saturday, he had a birthday party to go to and needed someone to cover for him. Normally my brother does it, but I yelled dibs and the next thing I knew, I was wearing three winter coats (under the Santa coat) and standing in front of his house.

It was SO MUCH FUN. Even though it rained/snowed the entire time, I didn't care. I was soaked to the bone at the end of the night, but I barely noticed because I was having so much fun greeting people, turning down donations and maybe dancing a little bit. 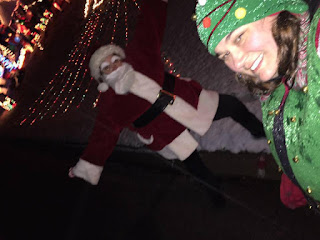 Also, I had some visitors! 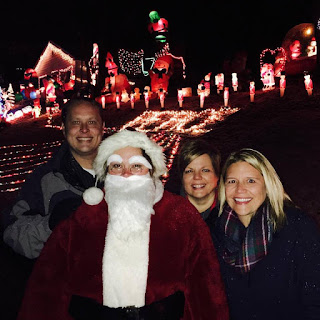 On Sunday, I met Missy and we went to the Aksarben holiday fair. I love this fair (we go every year), even though I never buy anything but candied cashews and almonds.

I was dragging on Sunday, so I went to bed right after bingo (which I didn't win at...again) but then I was dragging all day Monday, too. I think I need some quality time with my electric blanket soon.

Posted by Jen Wilson at 3:19 PM No comments:

When Natalie, Ryan, Missy and I went on that ghost hunt back in October, we were on a big school bus with the rest of the tour. The tour leader was talking (a lot) (like a LOT) into her microphone, and I was mostly tuning her out, but one thing registered in my head and I haven't been able to forget it.

She said that every 8 years, a person goes through a traumatic life experience.

Now, there are a lot of things to question here. 1. What can be defined as a traumatic life experience? 2. If this truly happens, then wouldn't everyone experience these things at the same age? Like everyone would have their first traumatic experience at 8 years old, then 16, then 24, then 32 and so on? (yes, I needed a calculator there).

I may be over thinking this, but it has me pretty worried. Because if number two is not really the way it goes, and its just a rough estimate of eight years, then something is going to happen to me soon. Because eight years ago is when everything came crashing down around me - I miscarried, I sunk into the worst depression of my life, and I got laid off from my job (for the first time). That is as close as I have come to traumatic - sure, I have had hiccups since then (two more lay offs, a tumor) but nothing was as bad as Fall of 2008 - that was the lowest, most traumatic I have went through.

I am really hoping this lady was talking out of her ass and this isn't a true fact. I have googled the shit out of it and not found anything that justifies her claim. In fact, everything I have found just says that basically a person changes who they are every seven years.

Okay so seven years ago....December of 2009. I was 29, I was just starting at Kaplan and getting my foot in the door in higher ed. My personal life was a mess, but I had really good friends who helped me through it. Coming off two lay offs, I was insecure and scared of pretty much everything. I was still driving a beat up ol' pickup truck, because I didn't feel financially secure enough to buy my own car.

Today - I have accepted my personal life and choices, and I love it. I am no longer scared of layoffs or money, because whatever. Everything settles eventually. I have taken charge of my health and have found a love for working out. I feel better about everything all of the time. I love every aspect of my life and my routine. I have bought two cars since then, but still aren't feeling financially secure enough to buy a house (but that also may be because I don't want to deal with mowing my own yard and scooping my own drive).

I'm going to choose to NOT believe Ghost Lady's claim, because well, it sucks.

But considering my four day weekend binge and my three day break from doing anything physical, I will take it!

I love the first day of the month, it feels like an opportunity to start over 12 times a year. I have a call with my wellness coach this afternoon, where I am sure she will set a new goal for December. I need to remember this month that December is 31 days long, and only TWO of those days are really holidays. The delicious treats are already finding their way into my life, so I need to stay calm and not overindulge.

I also bought a new planner and each day has three sections to write things in - so one of the sections is dedicated to wellness.