But God, I went off the RAILS during this four day weekend.

The four day weekend started off innocently enough. I left work and went to kickboxing and worked out super, super hard, hoping to negate some of the toxins I was going to put in my body later.

I went home to shower and pack, and I got texts from both Vinton girls saying they were on their way to the bar. Um, what? Vinton girls, on time for something? I kicked it into high gear, because not only was I 1. still in Omaha, but 2. literally had just stepped out of the shower.

Well, I rushed to Glenwood, not even stopping to eat (bad decision), stopped at Nick's mom's house to see the kiddos (and Nick and his parents, I guess), then stopped at my sister's house to drop off stuff for Thursday, and I still managed to beat the Vinton's to the bar. Some things never change. And it would be disappointing if they did.

Something else that didn't disappoint was a Thanksgiving-eve out in my most favorite town in the world. I drank too much, spent way too much money in the jukebox and saw so many of my most favorite people. I didn't take any pictures at all, but I managed to steal these from Amy's snapchat. 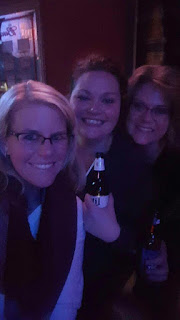 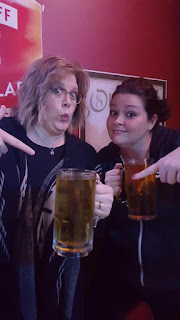 Thanksgiving morning I woke up and felt absolutely fine, which was shocking. But I wasn't about to argue. I just put on my ugly christmas sweatshirt and headed to my parents house. 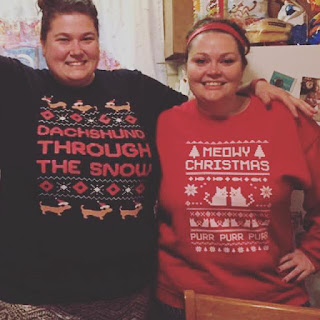 I seriously love that sweatshirt too much. I wish I was wearing it right now. I was feeling fine, except I was exhausted (seriously, at 36 I am way too old to be hearing "last call" at a bar) so I took advantage of some quiet Quinn snuggle time. 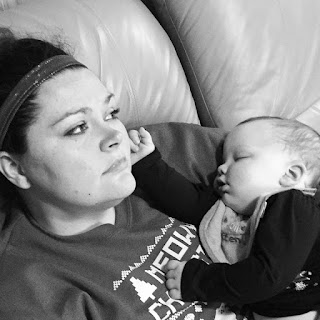 We watched Mighty Ducks 1 and 2 and she slept, and I let my eyes relax.

After dinner we did the annual lighting, and of course it was amazing. 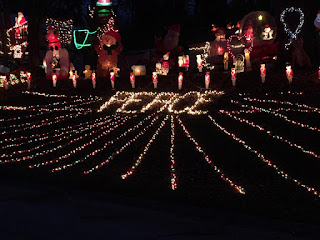 I love this part of the yard, where the music plays and the lights dance.

On Friday I got up, took coffee to Nicole and Eric who have had a rough couple days (Alex had to have surgery on his mouth/throat and is on a liquid diet for three weeks....I think I'll be avoiding Glenwood until mid-December.) and then went to Nick's to see the kids (and Nick, Hannah and his parents). I watched the first half of the Nebraska game there, then went to my mom's and turned the game off, but of course my step-dad had to turn it back on because Black Friday is the one day of the year he gives a shit about football and is suddenly the biggest Iowa fan in the world (not that I was annoyed) (I'm still very fucking annoyed).

We had dinner, and then I went back home and collapsed. So much sleep.

Saturday I was supposed to ring the bell for the Salvation Army outside Hy-Vee, but I went there and there was no one ringing before me. The email I got said to check in at the Hy-Vee customer service desk, but they knew nothing. I didn't know what to do, so I just kind of creepily hung out the bell area, but finally got frustrated and left. I was so disappointing, as I was really excited to do this. I guess I know why they are constantly looking for volunteers - I know I won't be signing up again.

Anyway, so I met Kate and we went shopping and then went to lunch instead. After we separated, I went off the rails - I went to Hy-Vee again and bought a million dollars worth of food, and then I snacked the rest of the day and watched movies. I don't know what came over me. Then on Sunday I got up, watched movies and snacked all day again!

As much as I love four day weekends, I am relieved to be back on a normal routine. Here's to reeling it back in!
Posted by Jen Wilson at 8:44 AM No comments:

One more pound gone this week! I am very happy with that.

Okay, folks, we have Thanksgiving1, Thanksgiving2, lots of cocktails and beers and a cheesetray staring us in the face right now. So the only goal for next week's wellness check-in is to MAINTAIN.

My workouts are still going really well, when I go to class. However, on Saturdays and Sundays I have been going to the gym, and I basically just walk around until I get bored and then leave. Any ideas for self-motivating gym workouts?

Happy Thanksgiving-eve, all!
Posted by Jen Wilson at 8:46 AM No comments:

There are so many non scale victories this week that can't be shown by a number on the scale. I have been working out so hard. I have been making good food choices. I haven't been eating all the crap food. I have been doing things I've never done before at the gym, and pushing myself further than I thought I could.

Since last week's weigh in, I have achieved "Very Active Days" on my work fitness challenge every single day. It was a secret goal of mine to not just achieve "Active" days, I needed the "Very" in front of it.

For my next check in, I am moving it to Wednesday, the day before Thanksgiving. I won't be home, so I want to get it done before I head to Glenwood for a few days.
Posted by Jen Wilson at 8:24 AM No comments:

Friday after work I met Ryan, Natalie and Missy for dinner and then we went to MJ Live! (I think there is an exclamation point in the official title of the show...I could be wrong, though.) I took advantage of the bit of time I had between work and dinner and got a 45 minute walk in - gotta get those steps in! We ate dinner at Goldburgs, which is always so so good, and the show was really good, too. MJ got a little too political for my taste, but he looked and sounded just like the original, and I spent the rest of the weekend listening to MJ songs.

Saturday I got up and headed to Glenwood to work on the lights. We got so much accomplished on Saturday, so we are in really good shape. I can't believe Thanksgiving is next week already! I can't wait to have a four day weekend. 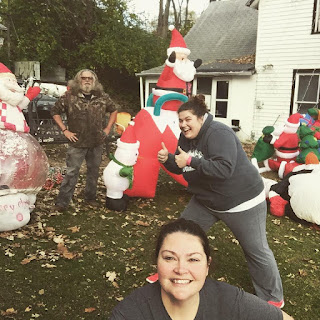 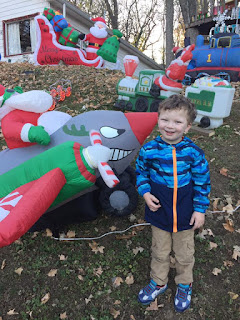 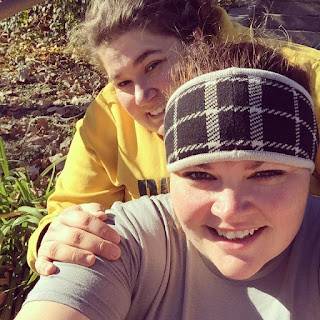 I got home Saturday night just in time to watch the Huskers win (yay!) and the Hawkeyes win (barf).

Sunday I did all my usual Sunday chores - laundry, food prep, cleaning, etc...and then met the gang at Bingo. I did not win, despite wearing lucky Husker socks. I went on a super super long walk on Sunday as well, getting a million steps in and catching up on all my podcasts.
Posted by Jen Wilson at 10:03 AM No comments:

Thursday wellness check (on a Friday)

Of course I miss the first Thursday I say I'm going to do weekly wellness checks. I was at a conference all day yesterday, and then I was really busy from the minute I got home until the minute I sat down to watch Grey's Anatomy. And then How to Get Away With Murder. So obviously I couldn't be bothered to blog.

Here is how my weigh in checks went this week:

I'm very happy with how this is going, but I do have TWO more thanksgivings between now and December 1st. I do really well during the week, and then tend to go off the rails on the weekends. I'm going to focus this weekend on reeling it in, while still living a fabulous and fun life.
Posted by Jen Wilson at 8:35 AM 3 comments:

We just had our annual wellness checks at work, and, per usual, mine was awesome except for my weight. I need to lose weight. Blah blah blahhhhhhhhhhhh.

My insurance is different now, and I have to show improvement next year in order to get some money taken off my insurance costs. Money talks, so I am going to kick ass over the next 12 months and lose weight again.

I talked to my favorite coach at Farrell's, and we set a goal to lose 30 pounds this year. I have the fitness part down - six workouts a week, mixing cardio and strength. She suggested I up my strength training more. I can do that.

It's the food that kills me! I just want all the delicious things in my mouth all of the time.

At Midland, after our wellness checks we had to call a nurse to talk about our results, but that's where it ended. So I would just get that call over with, and then continue on eating whatever I want and dreading the next annual check.

However, at Nebraska Medicine we can take advantage of a wellness coach, who will set goals with you and call back at appointed times. Also, you can share an online journal with him/her. I took full advantage of all of that, and we set a goal and some follow up appointments.

To lose 4 pounds by December 1st.

It may not seem like a lot, considering my first weigh in was October 19th. But I have three Thanksgiving between now and December 1, so I didn't want to set myself up to fail.

I am going back to my old plan, where I weighed in every Thursday. I will post this Thursday with what happens.
Posted by Jen Wilson at 10:16 AM No comments:

This Saturday was our first annual Friendsgiving. I wish it could happen more than annually. Weekendly would be nice. 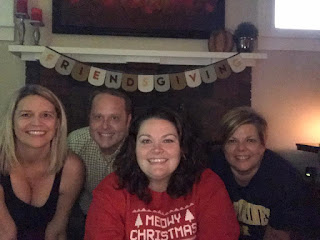 Missy hosted and dinner was absolutely delightful. The company was fantastic, the conversation was enlightening and the food was delicious.

After dinner we all moved downstairs to watch football, where everything fell apart.

And Ryan farted all night. ALL NIGHT.
Posted by Jen Wilson at 11:22 AM No comments: