Friday night Natalie, Ryan, Missy and I went on a haunted ghost tour thing with pyschic medium Kelli Miller. She has an office in ElkHorn and offers tours - you gather some friends (and strangers), jump on an actual school bus, and then Kelli and her staff take you to three "haunted" places. Kelli tries to get some ghosts to pay attention, and then all 40 of the bus riders try to take pictures and catch them.

We went to Kelli's office around 630pm and checked in. Upon check-in, we got a little baggy with a black rock (to protect us), Indian sage (to protect us) and a small flashlight. There were about five people working there and they would be going on the tour with us. One was a little too bossy and demanding for my liking, but I guess there has to be one of those in every group.

Anyway, around 7pm we got on the bus and headed to our first stop - the Bellevue Cemetery. This was pretty scary - I mean, it's a freaking cemetery at night time - but I did not capture any spirits with my camera. One girl did, and Natalie doesn't think she did, but she did, too. 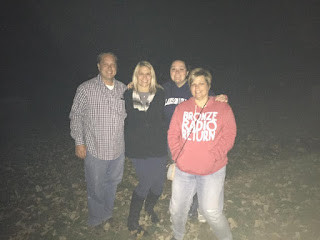 We walked around there for awhile, summoned some ghosts, and then got back on the bus and headed to what I think was the scariest place - Jewell Park. Apparently there used to be a rodeo there, and one of the cowboys died in the arena so he is still riding his horse everywhere. Kelli asked for some volunteers to stand in the middle of the field so she could ask the spirits to come stand with us, so Natalie and I headed out there. We felt the chills, and both got a weird dull headache, but, again, no spirits were captured by camera. It was really weird, though, how instant this ice cold chill came to our backside. My ass was an ice cube.

After that, we headed up into this foresty area to get to the top of a hill, where there was a deserted playground. This was the scariest part to me, because at the top of the swing set were a bunch of children's shoes, like wrapped around the bar. Kelli said she doesn't know what they are for. Missy said it is gang related. I think children were hung by their shoelaces and then fell down and died and are now haunting Bellevue. But what do I know.

On the way back down the hill, we GOT LOST. I mean, not totally lost because obviously we were still moving downward and there were only so many places we could end up, but it was scary. The leader kept stopping and questioning where we were. And Kelli, who was walking right in front of me, kept smacking something away from her head and saying "quit touching me". I mean, it could have been bugs or small wildlife, but let's get real - it was totally ghosts fucking with her hood and hair.

After that we stopped for snacks and a bathroom break, and then we headed to Council Bluffs to go to the Rails West Museum. Maybe I was just tired at this point, or bored, or over it, but I was not impressed with this stop at all. It was definitely my least favorite, and I was not scared at all. And of course, it's where we stayed for the longest time. There was just something so cheesy about the way Kelli and her minions were sitting in one of the train cars, "talking" to these two ghosts.

Still, even though I was not scared at all during the last stop, that still didn't stop me from being scared all night and not sleeping at all. Even though I put my black rock right on my nightstand.
Posted by Jen Wilson at 1:13 PM