Nobody puts Baby in the corner...and other weekend stuff

Hey-o!
I'm just going to ignore the fact that I haven't wrote in almost two months and just pretend like it didn't happen.

This weekend was amazing! I have been really busy lately, so this weekend I tried really hard to find some time for just me. I think I just need to slow down; I've been forgetting things lately and while I immediately jump to a diagnosis of early onset Alzheimer's, I think it's just that I need to slow down and think.

I like to pretend the weekends start on Thursday nights, because why not? So Thursday I went to see Dirty Dancing at the Orpheum Theatre. It made me SO happy. The Baby and Johnny characters were on point, and the music made me smile so big. Now I want to watch the movie really badly, and of course it's not on Netflix OR in my mother's massive movie collection. 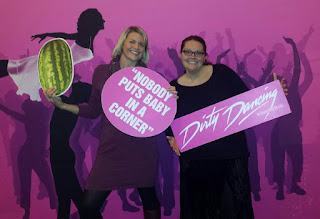 On Friday I left work a little early to go to Catfish Lake in Bellevue for my grandparents' 60th wedding anniversary dinner. I tried to get a picture of the group, but it's really blurry and my 8 year old cousin Evan wouldn't look up from his tablet anyway. My aunt did tell me that he has started signing things #Evan with a hashtag, which made me die laughing.

I love hanging out with my grandparents, and everytime I do I find more ways that I am just like both of them. If you know my grandpa at all, then you know why that terrifies me.

After dinner, I went to see Coop and Chan for a little bit and then Hannah, Nick and I watched Trainwreck. I had already seen it, but I think it's one of those movies where everytime you watch it you hear new hilarious things.

Saturday I got up at the ass crack of dawn to run the Mustache Dash with Missy. It was 22 degrees out, so my mustache quickly got covered with snot and fell of halfway through mile 1. Missy managed to keep hers on, of course. 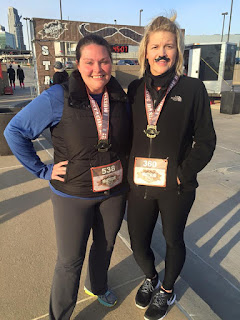 I have to tell you, Missy is a much better runner than I am. Those long legs and just generally being in better shape than I am always has her finishing before me. But this race I worked hard at staying caught up with her, and even though I basically just chased her throughout the whole run, I am proud to say I finished only like twenty seconds after her. And I realized I should probably just chase her every run because I felt kind of amazing afterwards!

After that, she and I went to breakfast (#duh) where we ran into our friend Jeff. After that I went down to Glenwood to sit with my sister at her It Works table at a Holiday craft fair type thing. Then Nicole joined us for lunch, and then I headed home for some much needed Jen time.

An evening on my couch with my DVR was exactly what I needed, and it was so awesome I decided to do it most of Sunday as well. But of course I got a little restless, so I went on a very long walk/run and cleaned my apartment too.

I have a very short week at work - only today and tomorrow - and I cannot wait for Thanksgiving on Thursday!
Posted by Jen Wilson at 9:48 AM No comments: