Hi there.
So, a few months ago, something happened. Everyone found out about this blog, and I felt exposed.
So I shut this shit down.

However, I miss blogging and writing, so I am back. Also, this blog acts as a diary of sorts for me, and I like having a place to write about my best times. Really, this whole thing is for me. And you are all just along for the ride. (Hi Paul.) So while I keep my innermost secrets in my private journal that is hidden in my apartment, this serves as a family-friendly version of my life.

So welcome back into it. Buckle up, it's a helluva ride.

Some stuff has happened since I last wrote.

1. I went to see my aunt in Vancouver, Washington. It was ridiculous fun. It was really hard to come home, and I spent a few days in a pretty bad little funk after I returned. Sometimes real life just sucks, you know? 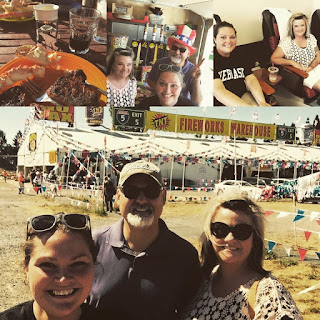 2. Missy and I are still running our 5k's and we are 7 for 7 so far. In August we are going to Des Moines to run the Iowa State Fairgrounds run. I am pretty excited about that one. But, I was also pretty excited to pose in front of this hotdog for our July run. 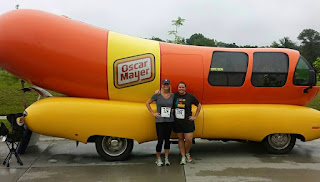 3. I am pretty sure Miss is going to try to convince me to continue with these races in 2016. I don't mind them, but since I joined Farrell's I have sucked hard at running. The July race was an epic failure for me - it was really hilly and I was coming off an 11 day vacation from working out. I seriously almost died. Okay, that is an exaggeration. But I did yell at the race volunteers and say fuck a lot. Anyway...while I'm not sure I'm on board yet, she did convince me to commit to a February run with her...in Florida...at Disney! Disney Princess 5K, here we come!

4. Speaking of working out, I am still at Farrell's. If you are reading this and you are even a little interested in the program, let me know. I have never enjoyed running, and I just did it because it was the best way to burn calories. But I LOVE kickboxing. There is something about punching a bag that feels awesome! However, our coaches tell us to act like the bag is a person we want to hit - and everyone I want to punch is a lot taller than me, so I am often punching towards the top of the bag. But, since Missy is into this 5k thing and I do admit, it is good for me and SOMETIMES I miss running, I am trying to incorporate more running into my life. Right now it is 3-4 miles 3-4 times a week. I don't know that I will ever run a half again. And I'm totally fine with that.

5. Missy and I went to Sioux City for a night and saw Seether and Three Doors Down with my brother's new boo. She's awesome. Yes, my brother has a new boo - which means two of my siblings have now been married and divorced before I have even been married once. #itsawesome But considering my brother is like a new person now and actually seems to be happy (actually their sappiness is sickening sometimes), I can handle that. 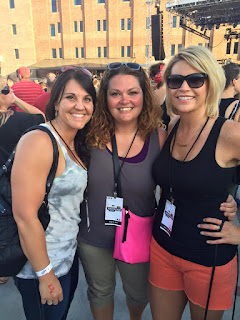 6. I crashed Nick's family vacation (again) and went to Okoboji with them. For years and years, I've listened to those Boone boys talk about this magical place, and now I have to listen to Cooper and Chandler talk about it, too. So I finally decided it was time to check it out. And they were right. About everything. Including Taco House. 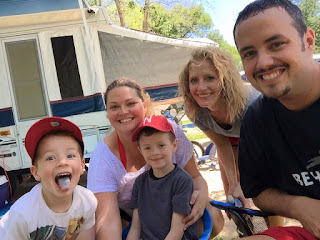 7. On my way home from Boji (I only went for one night, which was not enough time), I stopped at Buena Vista. I had an amazing 3.75 years at BVU - I made great friends, drank a lot, learned a lot about myself, gained a lot of weight, drank a lot, etc. My experiences on the student newspaper are still some of my favorite memories. However, the way my time there ended was so bad. And while I have forgiven and forgot, my heart still has some serious bruises. (Very short story - one of my roommates got together with the main love of my life, everyone knew except me, and wow did it sting). I have been so bitter about that event, I never wanted to return to BV and stand on the street where I watched them together. BUT - I knew I needed to. And so much has changed since that time, it was high time to move on and put it behind me. So I went to campus, spent a lot of time walking around and remembering, and finally got some closure on the whole thing.