Saturday night I got to check something off my bucket list.

Garth freaking Brooks was in Omaha. He started with two shows, then added a third, a fourth, a fifth and a sixth. Six shows in four days. This dude is crazy.

Thank God for his craziness, because it was an amazing show.

Is it bad I cried a little? It was just so overwhelming to see him live, playing all the songs I grew up listening to. When our families combined back in 1990-1991, Dad and Peg didn't have a lot of money, so we just spent a lot of time at home, entertaining ourselves. I mean, they had both just gone through divorces and just wanted their kids with them as much as possible. So that meant a lot of goulash, a lot of Friday nights watching TGIF, and a lot of time playing music and dancing around in the living room.

We mainly listened to two artists: Cher and Garth Brooks.

So when Garth was singing the songs that I grew up dancing to, getting to know my new family and screaming the lyrics with all my might, I got a little emotional.

I only took two pictures that night. 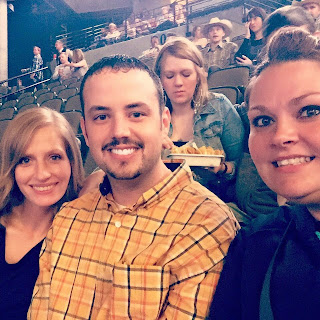 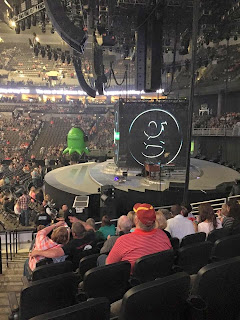 Yes, you're seeing this correctly. I took no pictures of the actual show. I just couldn't bring myself to lift up my phone and watch a single second through the screen. I wanted to absorb every moment of this show, and I did. And it was amazing. It was, however, disheartening that every time the big screen did a crowd shot, everyone was on their phones. Yes, most were obviously taking pictures or video, but a good amount were texting, or something of that sort. It made my heart hurt.

But then Garth rocked my soul, and he made it all better.

He sang all of his hits - it was AMAZING. That guy has endless energy, and I have never seen an entertainer like him. I have been to a lot of concerts, but wow....dare I say that was the best one? I feel like my body still has not recovered.