It was beautiful this weekend, and I spent the majority of it with my family. Which explains why I am completely exhausted today and I need another weekend to recover.

Saturday afternoon/evening I headed to my sister Nicole's - we made dinner for Mom's birthday. It was a nice evening - although, Saturday was supposed to be a rest day for me, but I got quite the workout chasing Alex around and flipping him all over the place. Seriously. That kid gives you a serious arm workout. 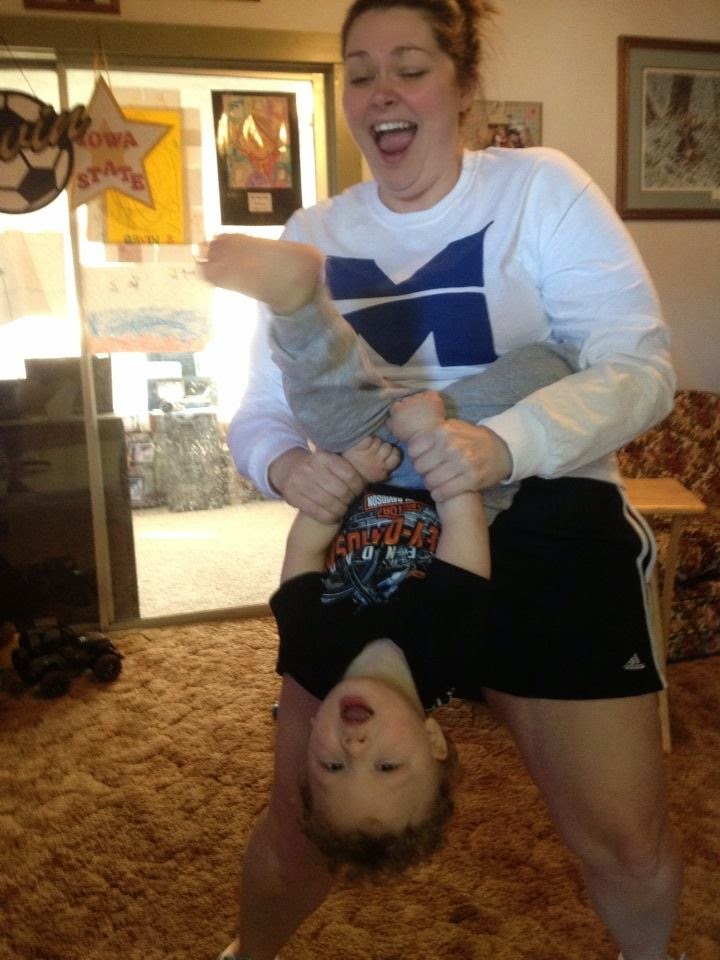 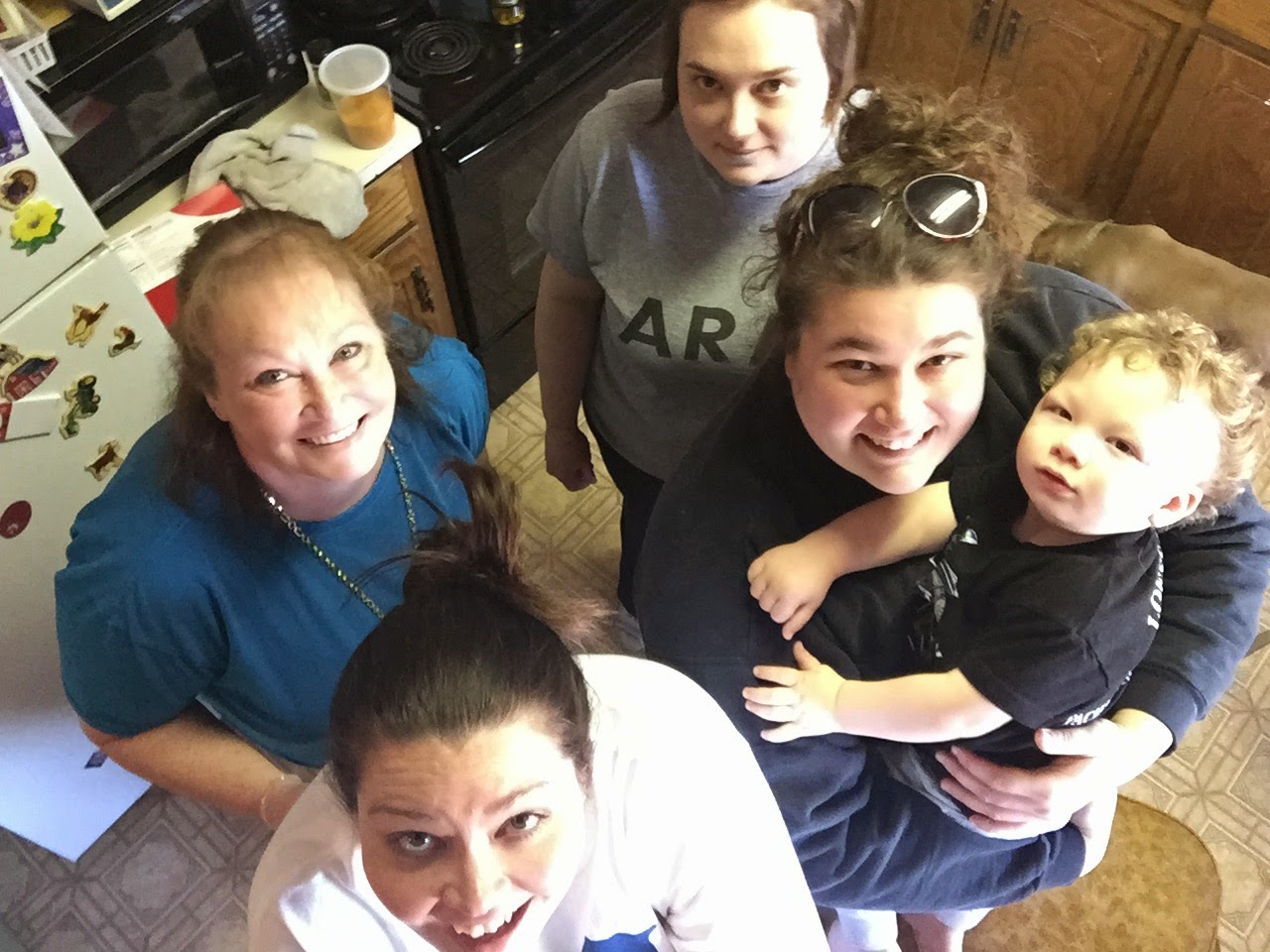 My obsession with the selfie stick is getting outtacontrol.


Anyway, then on Sunday after a work out, laundry and meal prep, I headed back down because Amanda and the girls were back and we had a BBQ. 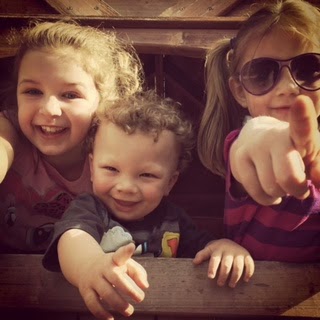 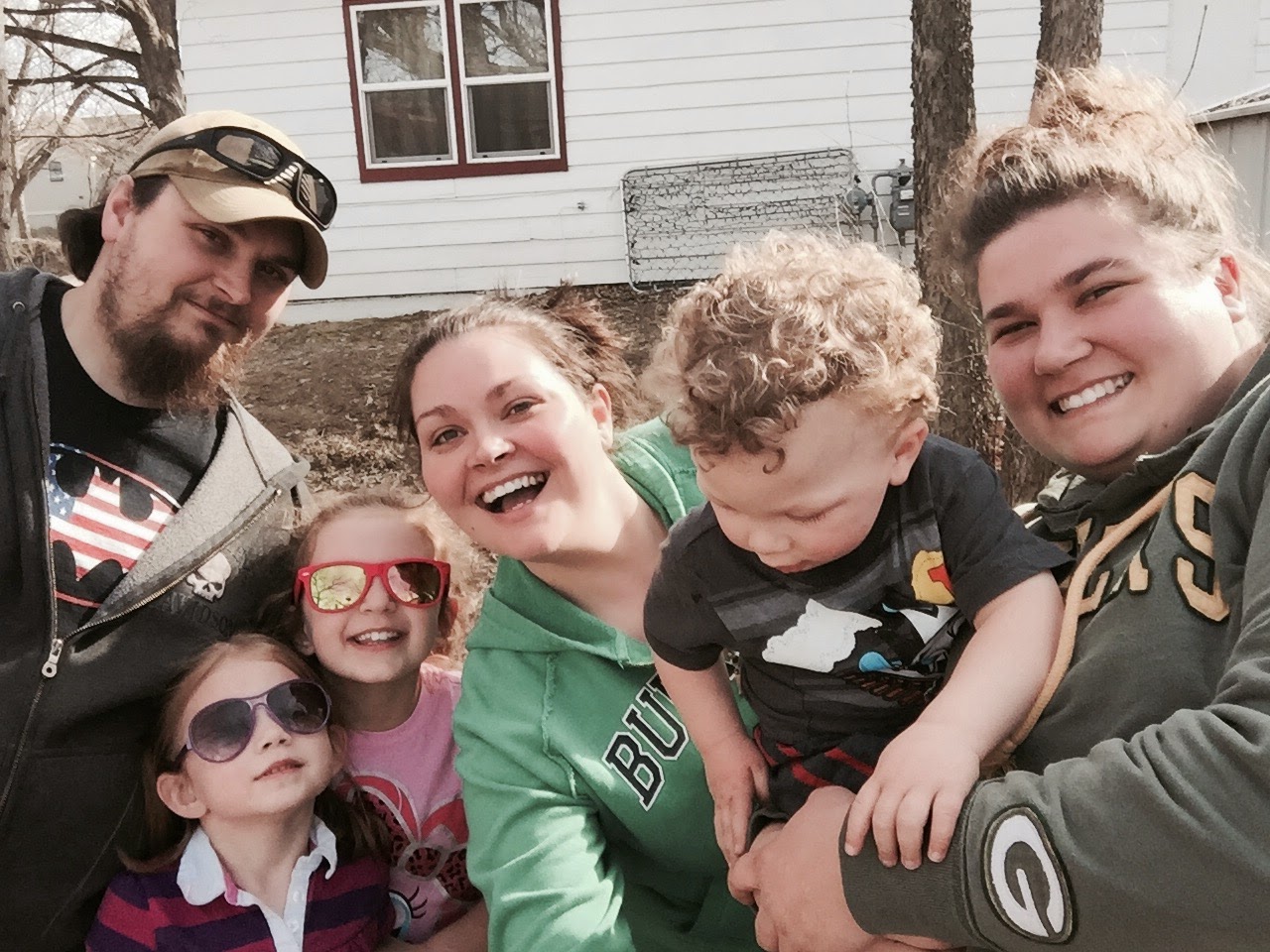 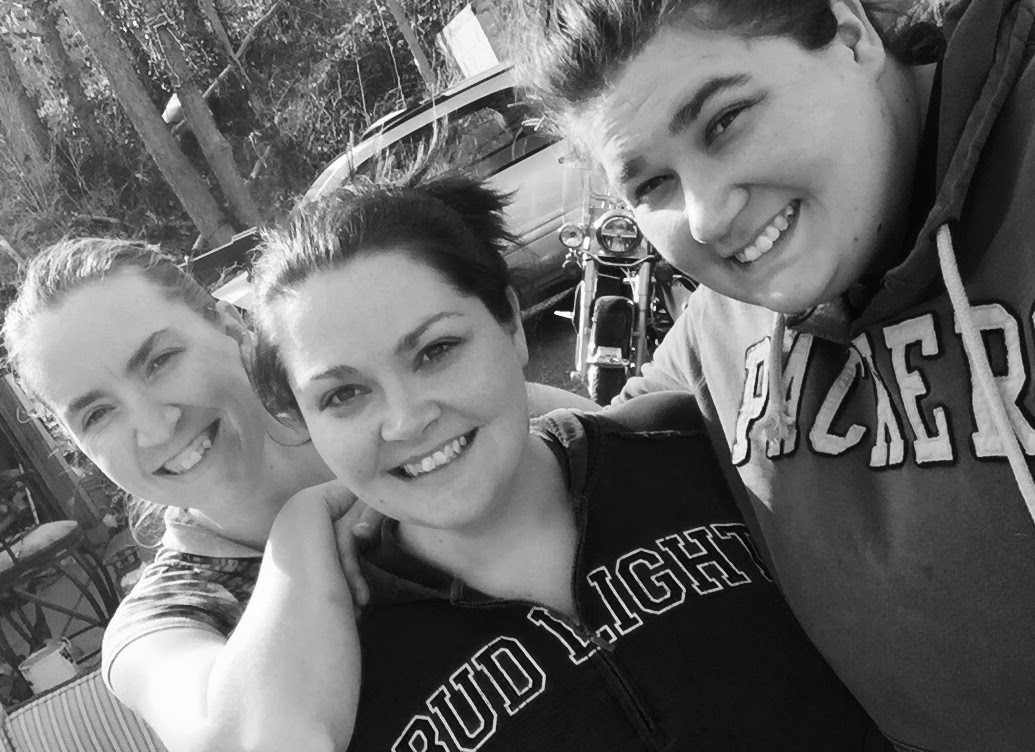 My selfie stick also gave me the opportunity for a new photo series I would like to call "I take pictures of myself while other people do all the work". So, I present to you... 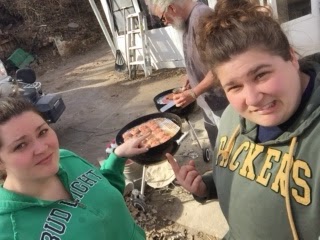 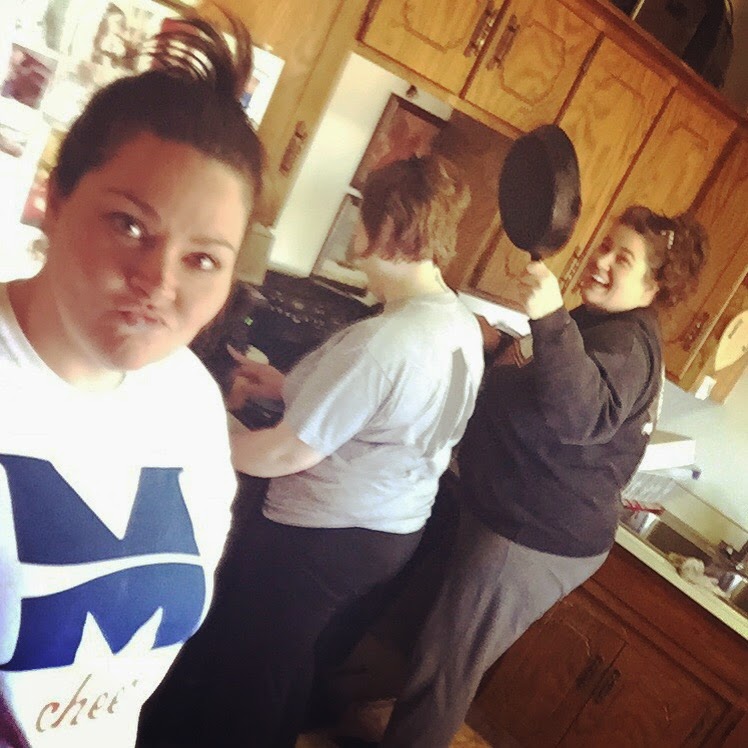 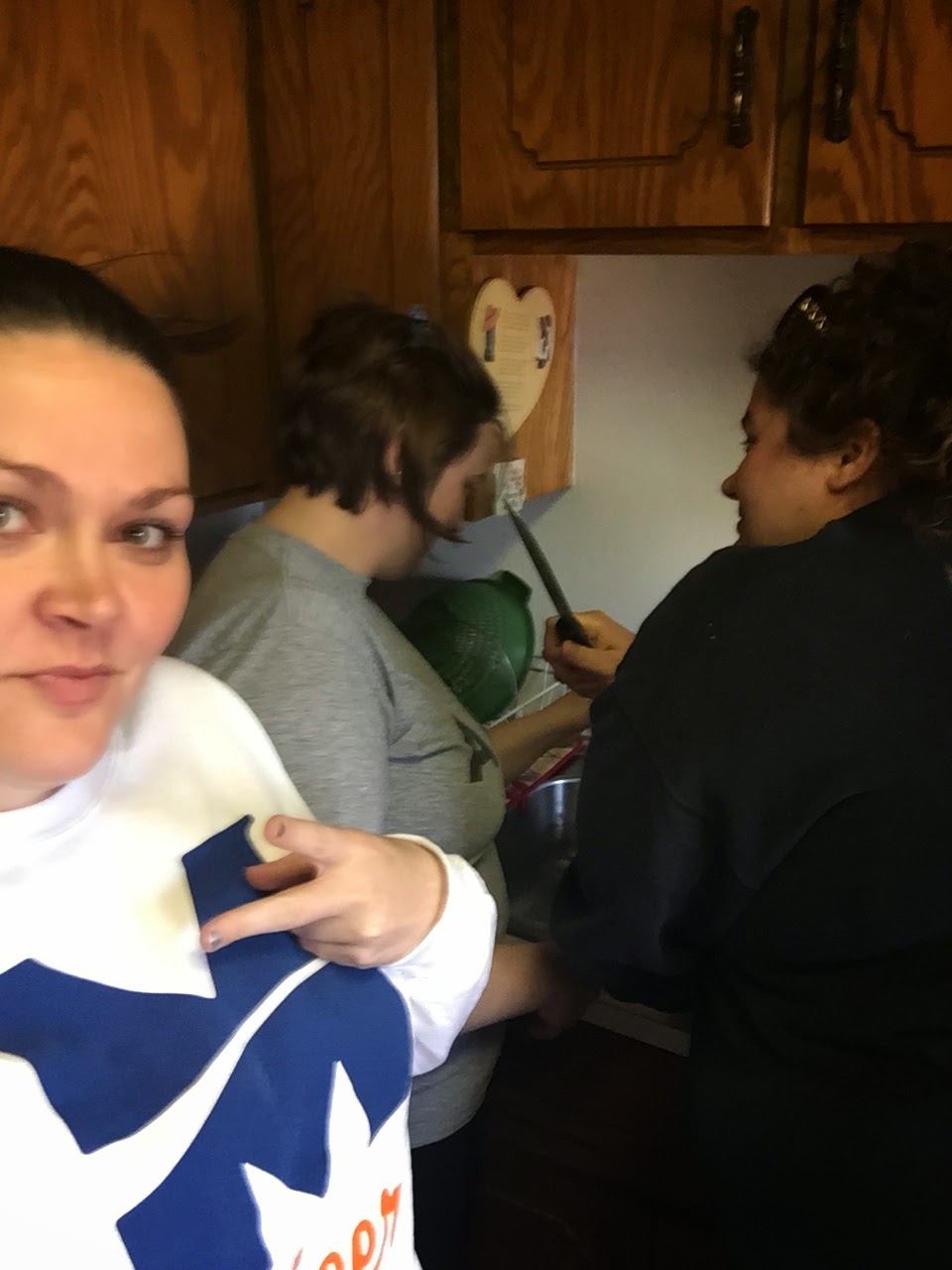 Posted by Jen Wilson at 9:53 AM No comments:

Wow, this little ol' blog has been getting a lot of hits lately. I don't know if it's one person reading it over and over again (hi, mom) (just kidding, my mom doesn't know about this blog) or what is going on, but my daily views have skyrocketed. Which is odd, since I am more boring now than I have ever been in my life. So I thought I should reintroduce myself in case there are new readers out there.

I grew up in a small Iowa town, living between my dad's house and my mom's house. They divorced when I was around nine, but it was a good thing. As I have gotten older and gotten more information, I see what a good thing it was for them to split up. At Mom's it was just us four kiddos - me, my younger sister Nicole, my younger sister Kate, and my brother Bill. At Dad's, two step siblings were added in to the mix - older brother John, and younger sister Amanda. John, Nicole, Amanda and myself were all in high school at the same time, and Bill and Kate were a little younger. We lived in a small, three bedroom house with one bathroom. But we had a trampoline, so it all buffed out.

I graduated high school in 1999. My high school (Glenwood High in Glenwood, Iowa) was pretty small and everyone knew everyone. I wasn't the homecoming queen (one of my best friends Ebbs was) and I wasn't a social reject, I just fell somewhere happily in the middle. I had really wonderful friends and my senior year was kick ass. My older brother was one year ahead of me, and we shared a lot of the same friends so that was nice and convenient. Especially when his hottie friends came to spend the night.

After that I went to Buena Vista University in Storm Lake, Iowa for my undergrad. I met some good people at college, but for the most part I have lost touch with them. My best friend from college, Toni, and I still keep in touch. I was really involved with the student newspaper, and was even the editor my senior year. I really love writing, which is why I blog now. I don't have another outlet, really, to write, so this is it (you lucky peeps).

I think it is probably important at this point to talk about Nick. He is the younger brother of my high school boyfriend, and we became thick as thieves. We still are to this day. But I bring him up now because he also went to Buena Vista, although his freshman year was my senior year. After I left he went on to meet his wife, Hannah, and they brought two little sweethearts into my life, Cooper and Chandler.

But enough about Nick, this is my story. Anyway, after graduation I went to work at Bluffs Run Casino, which became Horseshoe Casino, in Council Bluffs, Iowa. I lived at home for about four months and then moved in with a dude I met at the casino, James. He wasn't my boyfriend, but things got messy and complicated so I ended up leaving his place about nine months later and moving into my own apartment. I have lived on my own since then. I am sure some people judge me for being single, living alone, being a cat lady (who would never own a cat), etc, but I don't care. I love living on my own, being in charge of my own life, doing whatever I want whenever I want, etc.

I worked at the casino in several positions until October 21, 2008 and then was laid off. Several people had already been laid off (including Nick and Hannah, and later my friend Katie), but it was still a huge gut punch to me. I thought I was a lifer. I was kind of lost for a few years after that. I took a job at another casino, and was laid off again. Then I took a horrible job, and only lasted six months there before I randomly took a job in the education industry as a registrar. And that's when life changed. I realized education is a passion, and helping students find their way makes me feel awesome about what I'm doing in life.

One more lay off later (apparently that's just my thing...I get laid off a lot), and I have now landed as an academic advisor at a traditional four year university. I love Love LOVE my students and their stories and getting them closer and closer to graduation. I also was able to get my masters degree, so I now hold a Masters of Science in Management. So if you could refer to me as Master Jen, that would be great.

My family has blown up a lot - obviously not everyone takes the "single for life" route I decided to take, so my siblings have gotten married and had children. John has a daughter, Sophie; Amanda has Kaylee and Gracie; Nicole has Gavin and Alex. Kate is on the single route with me (solidarity, sister!) and Bill just got married, so I am sure they will be popping out little grumpy monsters soon (Bill is a bit of a grump). I love being an aunt, although I don't see a point in discipline or limits so their time with me is a bit chaotic.

Other than work and family, I spend time working out, thinking about working out, planning workouts....I like to stay active, although over the past six months I have packed on some weight. Because, you see, I also love to eat. They always say you can't out train a bad diet, and I learned that the hard way. But I'm getting it back together now, with some diet changes and different types of workouts. I have a love-hate relationship with running, but I have ran two half marathons and several other races.

I have really good friends - we got to a lot of concerts, movies, craft fairs, walks, runs, malls....typical things. Missy and I are currently in month three of running a 5K every month during 2015. Hopefully she stops getting faster, because she is slowly killing me already.

I'm also a big reader, a big television watcher, I love anything pop cuture/celebrity related, and I am pretty obsessed with Netflix. I am really good at old school Nintendo, I will bet on anything (and I typically lose) (but not at casinos, just fun bets with friends), and I am really obsessive about keeping my apartment clean. I try to make people laugh every day. I have been described as quirky, Phoebe-like (Phoebe from Friends), and ridiculous.

"I wanna kiss you, but if I do then I might miss you babe." - Lady Gaga

So to further discuss my "advice" giving session with my two high school friends...

Basically, they wanted to know what it means if a dude only calls you on the weekends, when he wants to hook up. I mean...if they thought about it for a hot minute, they would get  exactly what it means. But I realized they are probably a little new to the whole "booty call" thing, so I tried to dumb it down and explain it without being too graphic.

I explained that if you just reply to the text, accepting the offer to hang out, then put out, that you are giving them exactly what they want. I suggested maybe playing a little harder to get.

"Like, when he texts you tonight, just don't reply right away. Even if you wait an hour, it will drive him crazy," I explained, like I really have any idea what I'm talking about when it comes to dudes.

As I was driving home after that, I was thinking about my words. And I realized I do the exact opposite of what I told the girls to do.

When Matt and I broke up in high school, I decided that minute I would never play games with him. If I wanted to talk to him, I would call him. If he asked how I was feeling, I would tell him. Maybe my brutal honesty is what kept that relationship going...and going...and going...for years after it should have ended. In my head, I thought if I was just totally honest and never played games, I would get my boy back. But that's the thing - it did end, badly. And I never got the dude.

I must have just adapted that mentality...don't play games....into my other relationships as well. The problem is, those guys THINK I am playing games, therefore try harder. Example:

One dude, we'll call him Mario, wanted to make out one night. "No, I don't want to," I insisted, backing away from him. I then was standoffish and cold to him for the rest of the night, and it ended with him saying to me "you know, when you act like you don't want me it just makes me want you more."

Dude, what aren't you getting? It's not an act, it's the damn truth.

Also, this guy ...who is the same as this guy ... texted me last weekend. Seriously. After years of blowing him off, not responding to texts, telling him I'm not interested...he still tries. He still thinks I am just being a trick and playing hard to get.

So the moral of the story is what? Maybe I should start playing games and nab me a husband? Nah. Keep being honest and fabulous? Okay.

P.S. I am not saying all wives/girlfriends are game players. I am saying I have yet to meet a dude who is man enough to deal with my non-game playing ways.

"In winter, I plot and plan. In spring, I move." - Henry Rollins

This entire year I have been questioning my workout and exercise life. I am finally in a good spot and have made some positive changes.