I realize I did this in a weird order, but after running several 5Ks and a half marathon, I went backwards in my distance climb and ran a 10K on Saturday.

Let me start by saying (as I have mentioned before) I haven't been awesome about running since my half. I was burnt the fuck out with running. Training for a half is time consuming and soul sucking. So I have ran 3-4 miles a few times since May. I have walked a ton, and done strength workouts, but running has taken a back burner. These past two weeks I have tried to pick it up again, since I had this 10K looming over my head. I ran five miles last Tuesday, thinking that if I can make it to five I can get to six with no problem.

The race was dubbed "Midnight Madness" and didn't start until 830p. The time threw me off, and I thought it would be nothing to run that late - I ate a huge dinner and assumed I was warmed up enough...after all, I had been walking around all day, right?

Before our race, my nieces participated in the kids' run - it was just a short little race, but they were both so excited to do their first run. Kaylee kept saying "I'm kind of nervous, but I'm also excited. Like I'm a little nervous, but a little excited. It's my first run, you know!" And even though Gracie came in dead last, her enthusiastic "I came in last place!" was squealed in such delight that you know she had a blast.


Then it was time for our run - it took me a long time to get into a groove - during the first three miles my knees hurt, my legs hurt, and it was just hard to find a rhythm. But Amanda and I kept chugging along, and we were able to get to mile 4.5 before stopping to walk. It started to feel good at that point, and I got that familiar feeling of everything from the waist down going numb and I just move like a (slow) machine.

It was a cool night - only in the lower seventies when we started running. However, the humidity was at 95%, so it was disgusting. We were both completely drenches when we finished. 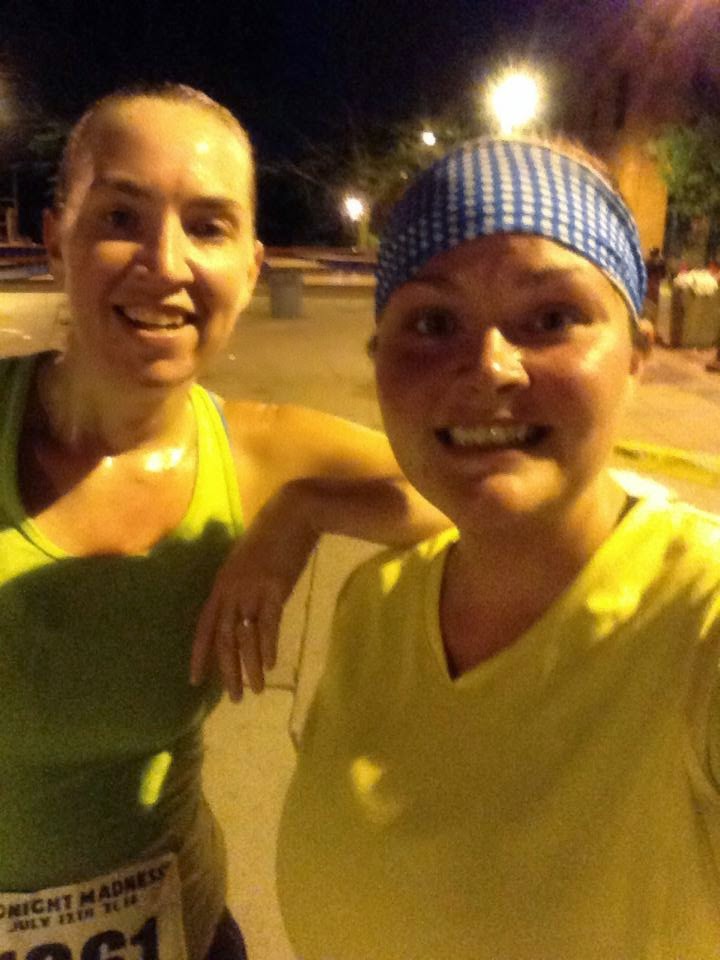 But we did it!