There aren't enough days in the weekend...

...and that's saying a lot, since my job allows me to have three day weekends every weekend (I'll give you a second to be jealous...).

I crammed a lot of stuff into my weekend.

On Friday, I met with Allison (my teammate) and got all caught up with the gossip at TJ High. Oh, to be young again. (Nope...wouldn't want to be young again, especially with Facebook and Twitter and Snapchat and Instagram and whatever else they do that I don't know about).

After that, I dicked around in the afternoon and then headed to Little Big Town and Keith Urban with Missy.

Okay...so I had this idea in my head that I never ever ever wanted to see Keith Urban or Kenny Chesney in concert. I don't know why. Well I do know why for Kenny...I don't like that he is ugly without his hat on, I don't like how short he is, and I don't like that he married Renee Zellweger for a hot minute. But I don't know why I was so hateful towards Keith Urban. Especially since he is AMAZING and now I am OBSESSED with him and I am listening to him RIGHT NOW.

And here is a really good picture the lady behind us got of me and Miss at the concert. 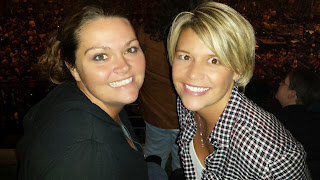 Saturday I got up at the asscrack of dawn and "ran" a 5K with Leslie. It was a cupcake run, so every mile we got a mini cupcake. They tasted amazing, and I'm glad Leslie was pushing her two year old niece in a stroller so I was actually able to keep up with her (she's a speed demon). ﻿ 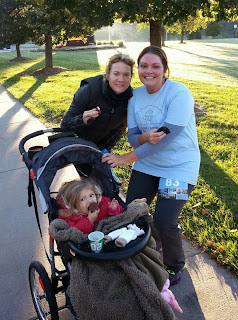 After that, I did the most marvelous thing...I took a two hour nap. I'm not one for napping in the middle of the day, but it was heavenly and it felt amazing. Why was I so against Keith Urban and naps? Thank God this weekend happened so I could be guided in the right direction.

After I cleaned up the drool from my nap, I headed to the wood for Grandpa's birthday party. I think he turned 78, but he kept telling everyone he was 28. Whatever. As long as he lives forever, I don't care how old he claims to be. I don't have a picture of Gramps because he's kinda a jackhole and refuses to get out of his chair. So instead I got a picture of my mom and my aunt and I toasting to him, and Grandma hugging me but refusing to drink. 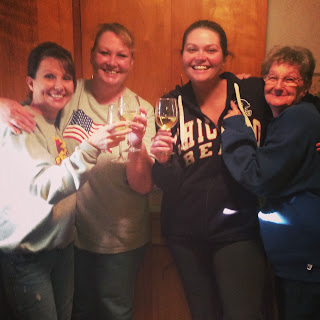 Sunday morning I got up and went to a very sophisticated brunch with some ladies, where we talked about sophisticated things and we all said the word fuck a lot. Then I headed to Cooper's fourth birthday party. 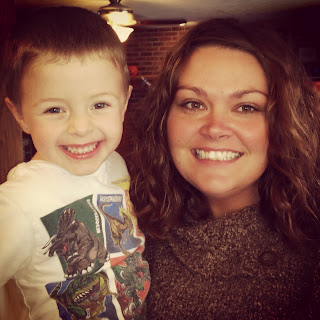 ﻿
I feel like I look exactly like someone from my past in that picture. If you agree, tell me who you think it is in a very private message because it kinda makes me want to die a little.
Posted by Jen Wilson at 10:21 AM