Alligators, hedgehogs and snakes, oh my

This (long) weekend was a goodie.

Since I am still part time (someone has to hire me soon, right?) I had Friday off. I did my usual of sleeping in, working out, interviewing for a job, rewarding myself for being awesome at said interview, etc, before meeting up with Missy to go to the free country concert at Turner Park. One of the artists was Danielle who was on Team Blake on The Voice and won, but sadly he did not answer the tweet I sent him saying I was watching her. (I'm constantly trying to get celebrities to tweet at me.) (Bret Michaels has twice.) (Just saying.) (Remember when I met him?) 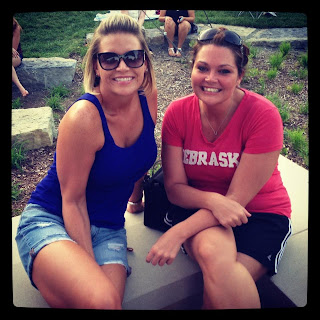 Saturday Miss and I walked with Alby at the Ovarian Cancer walk, and then we went to breakfast (duh).

So yes, I am back on Weight Watchers, so I attempted to order a low point meal. My attempt was good, with whole wheat pancakes, one eggbeater and one turkey sausage patty. That whole meal was like 6 points, so I okayed myself to order 6 points worth of hashbrowns for a 12 point meal.

It was okay. But breakfast is my favorite meal of the day, and that just did not hit the spot. So I need to budget points to splurge when I go out for breakfast, because I ain't playing that way no more.

After that, it was Gavin's birthday party time. I was way more excited than him, or any of the kids, or anyone in my family.

You see, we had hired Wildlife Encounters (http://wildlifeencounters.org/index_files/BirthdayParties.htm) where my buddy Kip works, to come and do a show at the birthday party. They bring real, exotic animals to the party and teach the kids a little something something about each one, but also the kids get to pet and even hold some of them. It was awesome. The kids were a little freaked of the scarier animals, but they warmed up eventually.

Now, my plan was to kinda sit back and let Gavin run the show. But when he had a panic attack about the alligator (which was the first animal), I realized I was gonna have to put on my brave face and hopefully get my nephew to touch some of these animals. Which is how I ended up in positions like this: 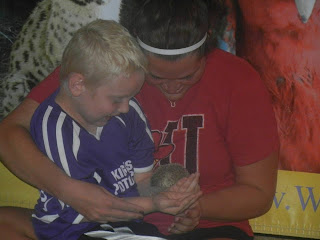 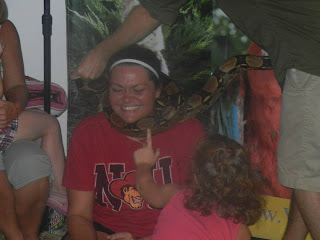 I would have NEVER allowed a snake to touch me, so it's a good thing Kip gave me no warning and just dropped it on my neck.

The party was great, and I highly recommend Kip and his team for birthday parties. He puts on a great presentation and he has a great personality that works well with the kiddos.

After that I met my long lost buddy Zach in Glenwood for a few cocktails and to catch up. And then I went to Nick's to watch the end of the Husker game with him and Hannah, and listen to Cooper come up with excuses every five minutes as to why he didn't need to go to sleep. (His excuses were valid though - I mean, wouldn't you freak out too if you heard random fireworks on a September evening?) (There were no fireworks, though.)