I don't handle death well. I really haven't had to deal with it in real life since I was ten years old, so my only real experience with it is when celebrities die. But if you know me at all, you know that is like having a family member pass.

I was dead asleep on Saturday night (Sunday morning) when my friend Jill texted me the news. We always text each other when celebrities die, get married, get knocked up, etc. The texts are very short, and to the point. I still remember when she texted me "Michael Jackson DEAD!". Most of the time I see her text, check Twitter just to make sure it's true, and then just wait for more news to come out. However, when I got the text "Glee kid dead" (Jill isn't much of a Glee fan), I was shook out of my third level REM sleep and wide awake. Which Glee kid? My heart broke when I saw it was Cory Monteith.

I adore Cory, just like I adore all the original Glee cast. It truly breaks my heart that the show has been renewed for two more seasons and we will have to deal without him being on there. It is also tragic knowing that he was dating Lea Michele in real life, and now she has to go back to work without him. It still doesn't seem real.

How is Glee going to handle this? They better not just have him "move away" or "go to college". Glee fans deserve more than that. We need to mourn the loss of this character too. And we were all led to believe that Finn and Rachel were "endgame". I mean, he even said it to Rachel:


"You and I both know how this thing ends. I don't know how, or when, and I don't care where you're living or what dope you're shacked up with. You're my girlfriend. We are endgame. I know that and you know that."

Oh, hi goosebumps. I've seen a lot of you lately, basically since I got that text for Finn was dead.
Anyway, if Rachel and Finn were supposed to end up together, not one Glee fan is going to believe that he just left.

When J.R. Ewing died, I thought Dallas handled it perfectly. They wrote the death into the show, and basically worked the whole season around it. Watching that funeral felt like closure to me (I did not handle JR's death well, either). I need that kind of closure with Finn. However, I have no idea how to work this out. Thank God I'm not a Glee writer. How is Rachel going to get the news that Finn died on the show? How can I even watch that, knowing in real life she got that same phone call and it destroyed her? Just like with JR, it's going to be hard to watch the cast get that news, knowing that their tears are real and they truly are heartbroken. 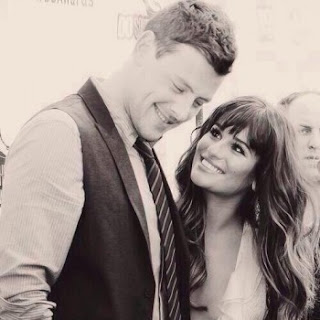