The day I met Bret Michaels

Yesterday started off as a typical Saturday. I had babysat late at Nick's Friday night, so I woke up in his spare bedroom. Then I headed to Coop's teeball game, and then went about my normal non-kid-having Saturday. I was heading to Norfolk later with Miss, Nick and Hannah to see Lita Ford, Vince Neil and Bret Michaels. (I don't think I need to explain my love for BM.) Normally I am so freaking pumped for a Bret show I can't even see straight. This time I was so excited, don't get me wrong, but I was a little more calm than usual.

I got my nails done and tanned (for Bret...which is embarrassing, I know, and Nick even said "you know he won't see your nails or tan, right?) and ran and grabbed lunch. It was all a normal day. Missy came over, and then we headed to Nick's to jump in his car and head to Norfolk. When we got there, we ate an awesome dinner at Big Red Keno (Omaha - get on board, we need one of these). And then we were nervous it might be cold later, so we ran over to Walmart to find something to throw on over our sleeveless shirts. I found this douchy looking knock off Affliction looking thing and knew I had to buy it. "This kinda looks like something Bret would wear! We might match!" I said as I grabbed it. "You should buy that!" Missy agreed.

We drove to the venue and were kinda make-shift tailgating when Missy broke the news to me. She had scored two meet and greets for Bret. We were in.

I couldn't exactly focus, so I started drinking through Lita Ford and Vince. 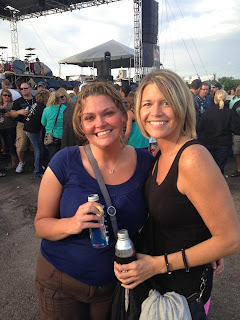 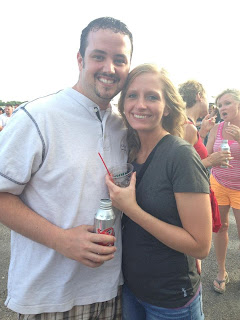 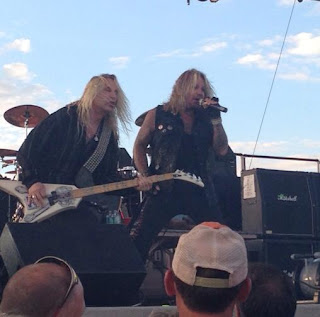 At 8:30p, we met with the group of eight other women to go back and meet Bret.

The guy leading us was a friend of Bret's, so I asked him if I could ask a few questions. He said yes, but if he can't answer I can't get mad. I agreed and asked if Bret was the type of guy to come home after a long day, put on sweats and just watch TV. "No, he is always on," his friend said. "He is always thinking, always working."

"Is he a good dad? Like does he see the girls often?"

"Yeah, he bought a private jet so he can go home often. His girls are his world."

He's so hot. Good dads are so hot.

Anyway. After a small wait, we headed back to his tour bus. We waited in another line, and then it was our turn. I was the first of my group of ten - obviously. Another guy ushered two of us in, so Missy and I walked up the bus steps and then HE WAS RIGHT THERE. Like RIGHT THERE.

And then the worst thing ever happened - I started tearing up. I never thought I would react that way from seeing a celebrity, but I was losing my shit. I looked at Missy and said "Please help me calm down," and the guy who had taken my phone to take a picture (one of his band people) was looking at me like I was looney tunes. And then it was my turn.

I walked over and instantly started gushing. "Oh, baby girl, look at that beautiful face, we need to make sure you get a good picture," he said. He cupped my face in his hands - as if he knew that is my favorite thing for a guy to do ever. "No dude, you don't get it, I like LOVE you," was my reply. 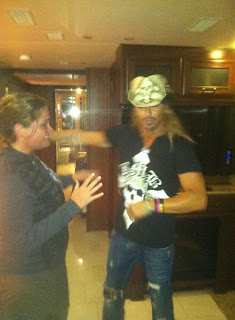 We posed. When bandguy went to hand the phone back, Bret grabbed it first. "We need to make sure this is a good one. Look, we look like we're engaged!" He handed my phone back to me. 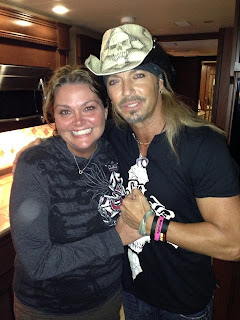 Umm, we are engaged, Bret. At least in my head. I hugged him again and walked slowly off the bus. I think I was high. It was the one of the best experiences of my life. I cannot thank my best friend Missy enough. I have been waiting for YEARS to get into a Bret Michaels meet and greet!!

Afterwards, Missy and I met back up with Nick and Hannah. I couldn't stop thanking Missy. I am still not sure she realizes how much this met to me. 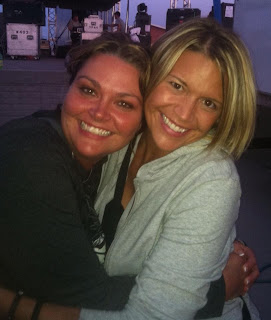 And then, of course, Bret went on. The show FLEW by. When I see him perform, I try to enjoy every single second, but I couldn't concentrate very well. He is amazing. 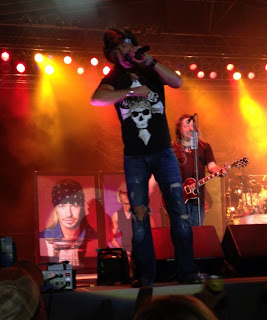 After the show, all my pre-Bret jitters that I tried to drink away caught up with me, and Nick had to stop like three times so I could puke. Still...totally worth it!!
Posted by Jen Wilson at 10:40 AM