A few weeks ago on Glee (yes, I still watch Glee), the whole hour was about guilty pleasures. I have to admit, I am falling off the Glee wagon, but that episode I loved. I love the thought of guilty pleasures, and I indulge in many of them. And, if you know me (and if you are reading this blog you probably know too much about me), then you know I am going to list them for you now:

1. Since this post was inspired by Glee, the first one is related to the show: Blaine. His real name is Darren Criss. There is no good reason for me to be obsessed with this guy. I mean seriously, he's decades younger than me and he plays a gay on the show. I don't think he is gay in real life, though, so that's just enough for me to have completely ridiculous, hot and intense sex dreams about him after he sings a few solos on that show. 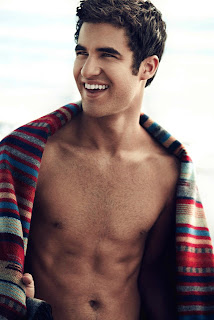 2. And while we're on the topic of (much) younger guys, this kid from Pitch Perfect is on my list too. Actually, that movie can be list. And the sound track. Especially the song the Bellas sing at the finals, because I rock that song, at high volumes, when I am alone in my car (and sometimes when I'm not alone) (sorry Kate). Apparently his real name is Skylar Astin. I don't even know what he's character's name in Pitch Perfect is. I haven't had any sex dreams about him yet, but I did watch the movie today, so tonight that could change. 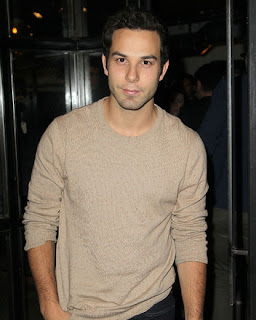 3. Enough about boys who are so young I could be their mother. Next up: Nicki Minaj songs. First of all, let me get this out there: I hate this woman. I think she is the shittiest role model for kids, and I believe she is single handedly the reason while American Idol is suffering from their lowest ratings ever (I don't watch Idol, and never have, so I don't really give a shit if it gets cancelled). However, I love that weird deep thing she does with her voice, and I love singing it along with her.

4. Cool whip. It's very low calorie, but my obsession with it is bordering on compulsive. I am trying to cut out junk food at night, so I eat a (few) tablespoons of that.

5. Mommy Dearest. This movie is so fucked up. But I am obsessed with it. I literally have to stop myself from watching it, because if I do I will watch it every day for weeks.

6. Crackers and cheese. I am talking about slices of Kraft cheese, split into fours, and then put on four saltines. This is my all time favorite snack. And the reason I can't keep this kind of cheese in my house, cause I can easily eat a full sleeve of crackers with those delicious squares of processed cheese on top.

7. Serial killer/psycho wives shows. I get so scared I have to close my eyes, and sometimes I have to fast forward through scenes. But I love them. But it's slightly embarrassing  and I know people probably think I am batshit crazy.

8. Babysitters Club books. Yes, everyone knows I read them as a kid. But does anyone know that sometimes I pull one (out of the 150 I have under my bed) out and read through it? Well, you all do now. They are just comforting, and easy, and require no thought. And you know what? If you read them as a kid, you are jealous right now that you can't curl up under my bed and read through Kristy's Great Idea.

9. Tanning. This is a relatively new one. I was really into tanning a long time ago, in 2008. Then I had to stop, but never started again. I recently decided I deserved it, so I signed up at a tanning salon and I am fully obsessed. But my boobs are pretty sunburnt, so I am trying to slow down.

10. Goodwills. I went to three yesterday alone. When I was actively losing weight, I said that I was shopping at the goodwill to avoid spending a ton of money to replenish my wardrobe when I was between sizes. However, I've been maintaining the same weight and sizes since June, and I can't stop shopping at the Goodwill. I pop tags like it's my job. And I'm not going to stop. I justify it like this: I spend way too much money on purses, tennis shoes, sunglasses and tanning. I need to spend $3.59 on clothes.