Sunday was my first ever race day.

I read a lot of weight loss blogs, and people always talk about (blog about) being nervous for race days. They can't sleep and they make sure to eat well and hydrate before a race, even if it's a 5k.

Anyway, my aunt and I got up early and headed into downtown Portland. It was a shamrock themed race, so I was wearing a green wig (thank god I was an oompah loompa for Halloween) and various beads/leis/whatevers. I was freezing to death.

We got down there and stood around waiting for the race to start. We lined up with Juana's coworker Jenny, Jenny's sister and Jenny's sister's friend. Still no nerves. I was freezing, but not nervous.

All of a sudden it was time - I was so excited to run - but we had to just stand there and wait for the line to move. I was getting pissed. I didn't have a time goal in mind, but I was annoyed the first ten minutes of the race I was standing there waiting to move.

Yes, people who have raced before, I didn't know the chip in my shoe was to measure my actual time. Shut up.

Anyway, then we finally got moving. I started running, and thought I was moving fast. I was going to use my map my run app so i could pace myself, but immediately forgot when I started moving. I also had a killer set list, but didn't even turn it on until after mile 2. I guess I was moving to the momentum and adrenaline, and also watching all the freaks around me (Portland ain't kidding when they say they are weird).

I realized my awesome green wig wasn't compatible with running, so I threw that sucker. Also, my various neck gear got to be annoying, so I tossed that as well. Somewhere between mile 2 and 3 everything started to suck, so I turned on my music and tried to zone out.

All of a sudden I was at the halfway mark! I was so excited, so I kicked up the speed a little and then...just last mile 3 I got my awesome side cramp, which I always get at the 5k mark when I'm running. Maybe it's my body telling me that's the distance I should stick with. Who knows. At any rate, I stopped to walk and breathe it out. I sound like I'm in labor when I'm trying to force breathe out a cramp, but at that point I don't care. I got to running again quickly, just wanting this damn thing to be over.

Nope. Cramp again. I stopped and walked again, but only for a few seconds. So annoying. Since I don't know Portland at all, I kept thinking "the finish line has to be right around this corner, right?" And then I'd be wrong. Finally, finally it was in sight and I hauled ass to get there.

I was so so so relieved to cross that line. When I was fat, I would walk 5ks, but the finish line was never exciting. It was more like "great, that's over, now that's go get breakfast." I couldn't run across this finish line because of the crowd, but I stomped on it. The clock above me said one hour eight minutes, but I didn't believe that because I knew we wasted at least ten minutes standing around before we were running. I decided it took me about an hour, which was a 12 minute pace, which was fine by me.

Later they posted the results, and I ran it in 55 minutes! That's when I realized what the chip in my shoe was for. Shut up. I realize 55 minutes is still slow, but I am incredibly happy with an 11 minute pace!

Takeaways from this race:
1. I'm so so glad I did an 8k to start off with. Now 5ks seem like a breeze! I usually run 4-5 miles during a workout anyway, so that was a distance I as comfortable with.
2. Even when I'm not training for a race, I want to keep running. Today I am not sore at all, and I feel pretty awesome. I want to keep the mentality that a 5k is an "easy" race.
3. I am so glad I started running, even though I hate it and it sucks. 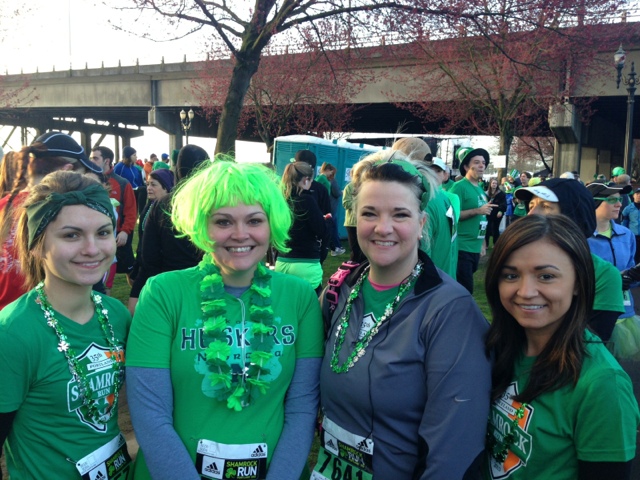