Seriously? There's an app for that?

You guys. I never listen to the radio in the morning, but for some reason on Halloween I was tuned into Sweet 98 (I refuse to accept they are no longer Sweet 98) and they were playing with an app on their iPhone that measures paranormal activity.

Are you kidding me?!

I couldn't catch the name of this app, so I emailed the show when I got to work and got a reply that the app was called Ghost Radar Classic. So duh, of course i downloaded. It looks like this: 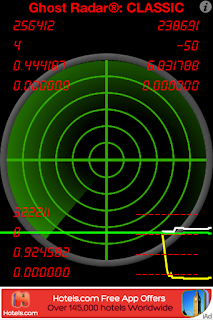 I don't know what those numbers mean. When a ghost is present, a little circle appears in the green targety area. Also, a word appears at the top, which I assume is a message from said ghost, or what they are seeing maybe?

I, of course, tried to measure the paranormal activity in my office first. I couldn't get anything to measure. I tried again when I got home. After awhile, a little circle appeared and I about crapped my pants.

"Allow" popped up on the screen. Fuck! This ghost wants me to allow them in?

"No...you're not allowed in here unless you are my grandfather or one of my spirit guides!" I yelled out.

The circle disappeared. I've been too scared to use it again, but I just did again to get the picture and one appeared and said "Roman". I don't know any Roman's. I don't even like that name.

The other day at Dad's I was using it (and that house is freaking haunted) and when my sister got there, a circle appeared and said "arrival". So I'm convinced it is real.

I'll keep y'all posted on what else I discover.
Posted by Jen Wilson at 6:31 PM