Yesterday was THE day.

I can't explain how much I love Bret Michaels. I don't know what it is. He's closer to my dad's age than mine, which usually grosses me out. But I would do dangerous, illegal things to, with and on that man.

My day started by sleeping in, then I got up and sent out a tweet to Bret. I always tweet him around concert day, and I always wear Cornhusker shirts to his concerts, hoping he will point to me, or grab me and pull me on stage. After I sent the tweet, I went to the pool and laid around for awhile. When I came home, I checked my phone and found a text from Nick and this: 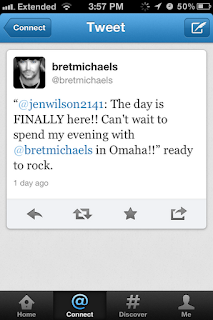 ARE YOU FUCKING KIDDING ME?! Bret Michaels retweeted me!!!

I had a mild heart attack and literally jumped around my apartment. Now he seriously might recognize me from my Twitter picture and pull me on stage. 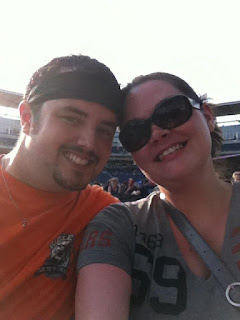 He was not trying to act like Bret, it was just 100 degrees out so he was trying to catch his disgusting sweat. It really wasn't that bad on the floor, though. Although I wish I had worn underwear.

When Bret comes on stage, I cannot explain what it does to me. I lose all control. I start jumping around like a fucking idiot, and I can't focus or speak. I just scream and sing. Thank God Nick is not my boyfriend, nor someone I want to sleep with. I'm pretty sure anyone interested in me would lose interest quickly after seeing me in that situation. 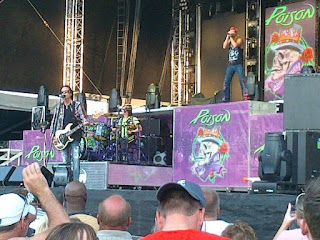 I LOVE HIM! I cannot wait to see him again. Last night he said he was going to be back on Celebrity Apprentice this year. I will need someone to cheat and tell me if he wins...I cannot watch knowing he may be kicked off at any moment. When he was on it last time, Missy somehow got the information that he made it to the finals, which was the only reason I could watch it.