291. While singing along with Taylor Swift the other day, I realized that the only reason I know what the word "sophisticated" means is because Stacy McGill, treasurer of The Baby-Sitters Club, was so sophisticated because she was from New York City, or the Big Apple as they so often described it. That got me thinking to how many things I learned from the BSC. And hence...today's list will be the wonderful things about the wonderful book series that I was obsessed with during my childhood.
292. The memories - my cousin and I were OBSESSED with these books. In 4th grade, we started a club in our class, and we signed our club names on our papers and tests until Mr. Funke made us stop.
293. Things I learned from the BSC 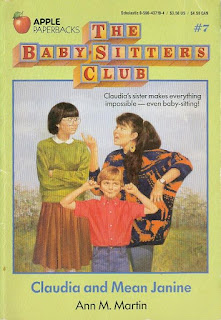 294. I remember reading these books out loud to my sisters on our bunk beds. Poor Kate must have been so bored.
295. The videos! They were on HBO. Yes, I have several. VHS tapes. And it wasn't that long ago I sat watching Mary Anne and the Brunettes intoxicated.
296. Say hello to your friends...
297. Going to goodwills and thrift stores as an adult and trying to recollect the series so my nieces will have it.
Posted by Jen Wilson at 9:50 PM