I made it a goal to bring reading back into my life in a more consistent manner in 2021. I read so many good books this year! I read 31 between my kindle/physical books and listened to 29 audio books. Here is my list, and I highlighted my favorite book from each month:
January:
Jackie and Maria by Gill Paul
In the Blood by Lisa Unger
You are Not Alone by Greer Hendricks and Sarah Pekkanen
Good Girl by Mary Kubica
The Other Mrs. by Mary Kubica
February:
The Other Women by Sandie Jones
Pretty Baby by Mary Kubica
The Jetsetters by Amanda Eyre Ward
March:
Conviction by Denise Mina
The Wrong Family by Tarryn Fisher
The Grown Up by Gillian Flynn
The Guest List by Lucy Foley (this was a very close second favorite)
The Last Mrs. Parrish by Liv Constantine
April:
The Last House Guest by Megan Miranda
Pretty Little Wife by Darby Kane
Every Last Lie by Mary Kubica
The Silent Patient by Alex Michaelides
May:
Behind Closed Doors by BA Paris
The Break Down by BA Paris
The Good Sister by Sally Hepworth (very close second favorite)
The Mother In Law by Sally Hepworth
June: (good lord, I read a lot this month)
The Family Next Door by Sally Hepworth
Never Have I Ever by Joshilyn Jackson (second favorite)
The First Mistake by Sandie Jones
The Wife Upstairs by Rachel Hawkins
Eleanor Oliphant is Completely Fine by Gail Honeyman
Nine Perfect Strangers by Liane Moriarty
The Last Thing He Told Me by Laura Dave
The Seven Husbands of Evelyn Hugo by Taylor Jenkins Reid  (I cannot highlight this enough, I loved it SO MUCH)
July:
The Kind Worth Killing by Peter Swanson
Then She Was Gone by Lisa Jewell
The Dilemma by BA Paris
The Girls Weekend by Jody Gehrman
Local Women Missing by Mary Kubica
Bring Me Back by BA Paris
Where the Crawdads Sing by Delia Owens
August:
American Royals by Katharine McGee
The Other Mrs. Miller by Allison Dickson
Malibu Rising by Taylor Jenkins Reid
The Golden Cage by Camilla Lackberg
Majesty by Katharine McGee (sequel to American Royals)
Anxious People by Fredrik Backman
September:
The Therapist by BA Paris (close second favorite)
Blood Orange by Harriet Tyce
Not A Happy Family by Shari Lapena
The Hunting Party by Lucy Foley
Rock Paper Scissors by Alice Feeney
October:
The Wife and the Widow by Christian White
Her Pretty Face by Robyn Harding
One True Loves by Taylor Jenkins Reid
Little Secrets by Jennifer Hillier
November: This whole month of books were soooo good. I can't pick just one.
An Unwanted Guest by Shari Lapena
People We Meet on Vacation by Emily Henry
The Push by Ashley Audrain
The Arrangement by Robyn Harding
December:
Such a Quiet Place by Megan Miranda
The Family Upstairs by Lisa Jewell
A Stranger in the House by Shari Lapena
The Couple Next Door by Shari Lapena
Posted by Jen Wilson at 12:48 PM No comments:

So much stuff has happened in the last few weeks, and I've missed having an outlet to write about it.

But I'm not going to get into it now.

Posted by Jen Wilson at 2:14 PM No comments: 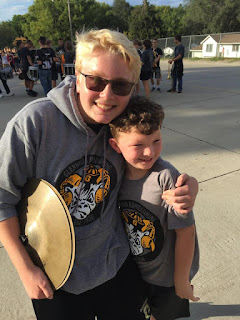 4. Having Friday off was perfect and I managed to not break the parade with my job I was given. 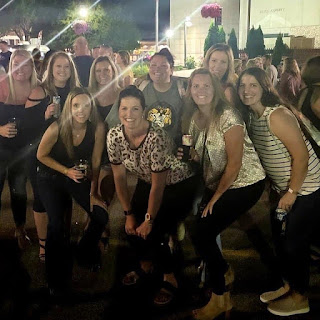 7.  Seeing these three in Glenwood is like a breath of fresh air. 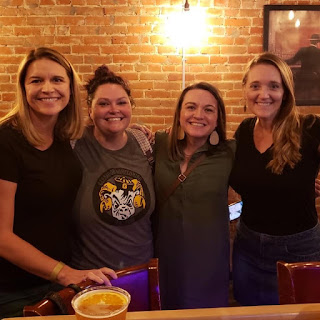 9. Getting so many high fives, good jobs, hugs...it was a good night.

10. And it was a good night because I have this group of support (along with Adrian and Julie) 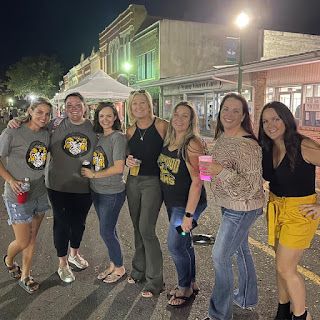 1. Another Husker football win, and a Tom Brady win.

2. Everything for the Street Dance coming together in the most amazing way.

3. My sister Kate, who helped me make this out of the kindness of her big 'ol heart 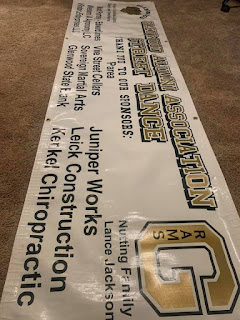 4. A night of bonding on an outdoor patio with Jenny and Jaimie.

5. A night of bonding around a (not on fire) firepit with Missy, Emily and Katie.

7. A weekend of awesome company.

8. Securing another food vendor for the Street Dance! (Yes, I was whining not long ago about not being able to find even one, and now we have three.)

9. Quinn was born six years ago, which means my life has been so much more amazing for six years.

10. Aubrey is two now and SO much fun, and she had a blast on Saturday partying hard in Quinn's room. 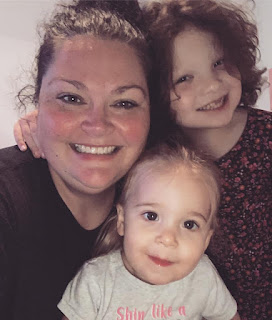 Posted by Jen Wilson at 3:16 PM No comments:

1. The start of Fall semester. There's just something great about it.

2. Securing not one, but two food vendors for the Street Dance, when I legit didn't think we were going to have any

3. All the things I have learned since starting this Street Dance project 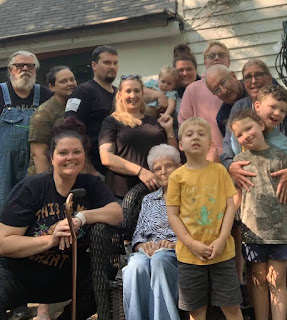 5. Finishing two books this week (one was an audiobook)

8. Also, feeling like I was right and I FREAKING told you so.

10. This picture of Aubrey. Look at her little hands! 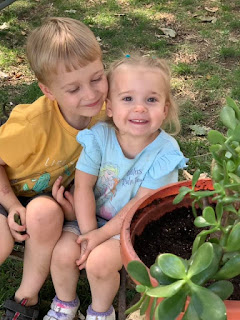 Posted by Jen Wilson at 1:14 PM No comments:

1. When an event I planned for months (in this case, New Student Orientation for 180 students) goes off very well. Obviously there are some things to change and tweak, but overall everything went well and it was one of my more complicated ventures.

3. Going to a scary movie with Nick where I am petrified to the point of trying to bribe Nick not to go. But then I go and it's no big deal and even better, it didn't keep me up all night.

4. Watching Coop and Chan play football, Chan for the very first time!! The rain and wind tried really hard to cancel the game, but it didn't work.

7. When I was packing up and getting ready to leave, Chandler told me about a house near them that's for sale so I can just move there.

8. Getting a two arm, real hug from Cooper without a device in his hand.

Posted by Jen Wilson at 6:29 PM No comments:

It's not news to anyone who is close to me that I didn't handle quarantine and COVID very well.

I got into a weird depression, even though I've never been like a crazy party animal who went out all the time.

I take that back. Post 2008, I've not been a party animal who goes out all the time.

Anyway, I didn't handle the world shutting down very well. And I still haven't really gotten my act together. I would really, really like more time to get my act together, but it seems as though the world is going to shut down soon again.

As long as I can still have my Street Dance on Sept 18...I'll be okay.

I need to get back on track, just with consistency, health, setting goals, not taking naps every day, etc. And I can't use COVID and the world shutting down as an excuse anymore. I need to completely transform everything and become a new person.

You know, no big deal.

I will be working on this starting Monday, after I get through Hell Week at work and my last weekend before fall semester starts.

Someone hold me to this, please.

Posted by Jen Wilson at 5:37 PM No comments: